In spite of an almost constant stream of “SEO is Dead“ blog posts and whining about how hard Google makes our job, it comes as no surprise to serious SEOs that we need to evolve along with the search engines and the users.

And SEO is most certainly not dead! In fact, from my point of view, it is more alive than ever before. 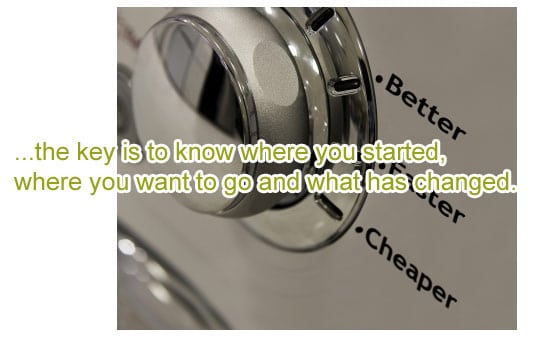 Just as performing basic on-page SEO isn’t a one-time affair, neither is any other aspect of optimization. Whether you’re focusing on the search engines or user conversion, your strategy must be flexible. Your ability to recognize and respond to various signals in an appropriate fashion can often make the difference between a “Nice try” and a “Woo-hoo!”

So, what signals do you watch? PR? SERPs rankings? Traffic? Conversion rate? Search terms? All of the above and more? Probably that last, although personally, I wouldn’t concern myself too much with PR. It’s a signal, to be sure, but what we can see of it is questionable in terms of its currency and reliability, so I tend to ignore it.

Of course, if I wake up tomorrow and find that my site has jumped to PR9, it would probably get at least a little of my attention.

Regardless of which metrics you like to focus on, or which tools you prefer to u, the key is tseo know where you started, where you want to go and what has changed. With those three basic elements, you have the beginning of a decent strategy.

The idea, after all, is to do it better, faster and cheaper.

To know where you started is obviously important, but it isn’t really enough for a viable baseline. You also need to know the terrain. If you’re ranking in the #11 slot pretty consistently and you suddenly find yourself in the #7 slot, that’s good, right? Not necessarily! How did you get there? Was it something you did, or did a competitor or two simply drop off the map?

In order to be able to judge that, you need to look at your competitors as well. You need to know what terms they’re ranking for, in what position, what their link profile looks like, what the state of their site is”¦ a whole list of things. Ideally, you start with nearly as good an audit of their position as you would if they were also your clients.

Then, when you see a major change in your position, you review their profiles, and you’ll be able to tell whether your actions drove you up, or their actions drove them down. If it’s the latter, then now is no time to celebrate, because just like you, they’ll notice their drop, and will be taking immediate actions to correct it.

This is where you can play two games at once. First, it may be an opportunity to pass them up while they’re occupied with damage control. Second, and often a LOT more fun, you may have an opportunity to confuse them and make them either prolong or worsen their own situation.

See, they’ll tend to think that once they find what happened, all they have to do is return to the previous state, and they’ll also regain their previous position. Anything you can do to alter the outcome of their efforts will confuse the results, and may make them doubt that they found the real problem.

Obviously, it doesn’t always develop that way, but occasionally it can, and it’s an opportunity that you shouldn’t miss. It also carries a lesson”¦ don’t assume that you’re working in a vacuum! Everything that happens isn’t driven by just your actions. Changing terrain can be the culprit, too.

Knowing where you want to go sounds simple, and if you’ve properly mapped out your strategy, it may be. Simply telling yourself that you want the #1 slot or you want to beat “X” competitor isn’t enough, though. You need to identify the right search terms to focus upon, first. Here again, knowing the terms for which the competition is ranking is critical.

It’s entirely possible that your goals will be adjusted from time to time throughout your campaign, due to changes in the competition, the search engines’ algorithms or your site’s configuration. Here again, flexibility is paramount, as contingencies nearly always will pop up when you least need them. Being prepared can turn a thorn into a rose.

This is an area in which I see many people shoot themselves in the foot. When changes have been made to a site, there will usually be a perceptible effect. If more than one change is made at a time, it is often difficult to pinpoint which change caused which effect. So although it may not always be practical to do so, it’ll nearly always save time and effort to make one change at a time. Take advantage of those opportunities”¦ they save time AND can be very productive.

Rarely should you find yourself targeting only a single search term, however. It’s usually more effective tactics to simultaneously target two or more terms. If your efforts are effective, this may also present a more complex situation to the competition.

When you get a good clean picture of your starting point, have a clear image of your goals and don’t lose sight of all the different things that might have caused something, then you have the basis of a good living SEO strategy.