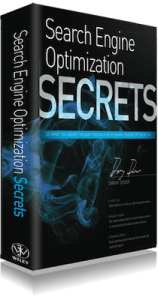 When Danny Dover proclaimed he was going to publish a book that “literally explains everything I know about SEO”, I bought in to that sales pitch hook, line and sinker. I’ve been an admirer of Danny for years and consider him the smartest of the (ex-)SEOmozzers around. So a book that contains everything he knows about SEO will surely be a true gem.

I pre-ordered the book, titled Search Engine Optimization Secrets, and it arrived yesterday morning. I’m writing this review less than 36 hours after having started reading, so you might leap to the conclusion that it’s a thin, lightweight publication. It’s not. At well over 400 pages and containing precious little fluff, it’s quite a dense work. But Danny writes in an enthusiastic, energetic style that sucks you in and gets you through the book quicker than you realise.

So does it live up to its promise? Does the book really contains everything Danny Dover knows about SEO?

Well if it does, either Danny doesn’t know all that much about the intricacies of SEO, or he has a very narrow definition of what SEO is. Since Danny is undoubtedly a very clever fellow, I suspect it’s the latter. But don’t get me wrong, it’s not a bad book by any stretch.

Danny has written his book for SEOs who have some experience – though you don’t need to be beyond the beginner level to understand the whole book. And that’s my main problem with it: it’s a beginner’s book.

It’s quite thorough in its handling of SEO. Every white-hat aspect of SEO is discussed and Danny’s perspective on it explained. Best practices take up a solid portion of the book, which makes it great reference material for beginning SEOs that want to have all the basic bits and pieces of knowledge close to hand.

But it’s not ‘advanced’, whatever that means. It discusses everything in the same way a prime-time news programme discusses current events: quick, bite-sized, and easily digestible. But there’s always a deeper story, a hidden truth, and this book doesn’t even begin to touch upon those subjects. It’s shallow and leaves you somewhat unfulfilled, like a hasty McDonalds meal.

Yet what Danny does do, and does very well, is apply a structured approach to SEO. The book’s greatest strength lies in its description of the SEO audit process and the templates it provides. Even for seasoned SEOs this is likely to be useful stuff, quite helpful to give your audits that extra level of polish and professionalism.

I paid a bit over Â£16 for this book on Amazon, and I think it’s worth that. It’s a suitable, if somewhat shallow, “phase 2” follow-up to an entry-level book such as The Art of SEO. It won’t turn you in to the seasoned SEO pro that Danny is, but it might help you get there eventually.