In the fallout of the last publicly announced (sorta) Panda update and as the internet prepares for Penguin: The Next Generation I find myself talking about algorithm updates and penalties a lot. 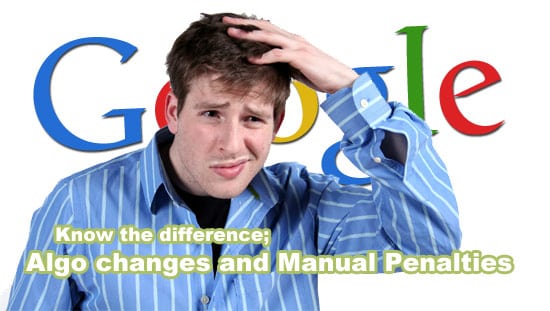 Unfortunately it seems like even folks in the industry can’t differentiate the difference and I am having conversations I wish I didn’t have to have.Â  Which is why I thought I would take the opportunity to help break down the difference between the two in hopes of educating SEO’s and webmasters alike in getting their terminology straight so that they can better address them.

Let’s start with algorithm updates since they are the most commonly misunderstood and still the most talked about.Â  Panda and Penguin are both algorithm updates, they are not “penalties” as so many people refer to them.Â  As Matt Cutts explained during SMX Advanced last year,

“…when we use a word like “penalty,” we’re talking about a manual action taken by the web spam team…”

Algorithm updates are an adjustment to the “over 200 signals” Google uses to rank content within its index.

People talk a lot about recovery from things like Panda and Penguin, hell even I put in my two cents about recovering from Penguin, but as David Harry pointed out in a post last year the only way a site is going to recover from these types of updates is when the next rendition of that update rolls out.Â  If you’ve been hit by a Penguin update or a Panda update the only way you’re going to recover from it is the next time the algo is refreshed.

Manual penalties are actions taken by Google’s web spam team to penalize a site for practices that are against Google’s webmaster guidelines.Â  These are the types of things that will trigger notifications in Google Webmaster tools, such as unnatural links and the like.

If you’re uncertain if you’ve been hit by an algorithmic update or a manual penalty always refer to Google’s webmaster tools for your website.Â  Matt Cutts has confirmed that an algorithm update will never trigger a notification in webmaster tools:

If you have a notification about unnatural links in webmaster tools or something similar, chances are you’ve been hit with a penalty.

Note: A Google Webmaster Tools notification does not always mean your site has been penalized, as Google pointed out after some notification confusion last year.

Fortunately, with manual penalties you are not left to the fate of the algorithmÂ  refresh to recover.Â  Instead you are simply left to address the issues that got you into the mess in the first place and then hope for a blessing from Google upon acceptance of your reconsideration request.

To recover from a manual penalty you must first identify why your site was penalized.Â  Once you’ve done that you have to do your part to make it right.Â  Once you’ve gotten your site back to the point that it is well within Google’s quality guidelines you can submit a reconsideration request.

If you’re not sure how to complete a reconsideration request, or what to put in it, Matt Cutts does a great job outlining what should be included in this Webmaster Help video:

If the reconsideration request is accepted and Google is happy with your changes you will recieve a notification in Google Webmaster Tools like the one below:

As you can see algorithm updates and search engine penalties impact the recovery process greatly.Â  When dealing with a fluctuation in rankings or in organic search traffic it’s always important to analyze what you are seeing and do the best you can to identify if you are seeing a manual action or simply a shift due to algorithm changes.

The outcome and how you correct the problem can vary greatly.