The beauty of running your own business with a small group of trusted individuals is the fact that they’re trusted individuals. I trust them and their opinions ““ but does that mean that Jahnelle, Hilland, Massimo, Dava or anyone else we have on our team is automatically going to like what I like? Of course not. ““And while I trust their opinions, I can assure you I’m not going to click on whatever results the search engines give me just because one of my trusted friends recommended them. 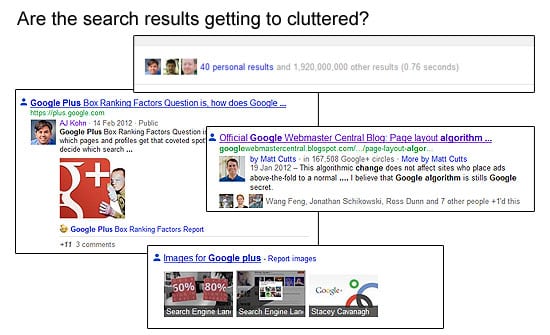 90+ Million Have Embraced Google Plus? Prove It”¦

Wooooow. Somebody at Google must have decided to throw these things out the window. Plus Search is intrusive; its addition seems to be based off feeling everyone should use Google Plus. It isn’t simple. It’s a much less important feature from a user prospective than the search engine results. ““ And yet, here we are with this stupid, intrusive, irritating, opt-out instead of opt-in, annoying "feature".

All these applications ““ these social platforms ““ are meant to be trust builders. In fact, a lot of what we do is trust and authority building. However, whether it’s Google Plus, Twitter, Facebook or any other social platform, I have to wonder if it’s gone way beyond anything that makes sense.

Not to bust anyone’s fuzzy feelings, but think about all the people you have following you, and that you follow. Out of them all, how many have you ever worked with? How many do you know personally? For that matter, how many do you talk to ““ even if it’s just occasionally?

On G+, however, where you can chat to your heart’s content and have tons of room to reply, I have over 2,000 followers and talk with maybe 50 of them. Not because I haven’t tried, but because they don’t care to answer. To me, that means they’ve put me in a circle for some other reason than connecting ““ and I don’t care to find out what it is, to tell you the truth.

What I see is this ““ with G+ integrated into search, the places you decide to share will pop up in my results. While I might respect your opinion on social media or search engine optimization, I don’t care to see the latest sleazy gif you found humorous enough to share with your G+ followers. Thanks, but no thanks.

The brilliant minds that decided to integrate my SERPs and my social ignored that little tidbit. They fail to see that there’s a line ““ or should be.

All of a sudden, the SERPs are a popularity contest ““ and we’re all going to be the losers.