Hello and welcome to this year’s edition of patents of interest from the fine folks at Google. This isn’t actually ALL of them, believe it or not, but the ones I found interesting enough to share in my SEO Geeks Newsletter. 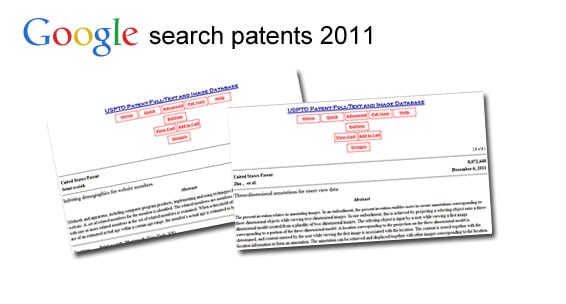 Another element to consider are the dates. Some patents may have been filed in 2010 or 2011 while others as far back as 2004. This means looking in aggregate may not tell the picture as it first seems. That being said, it is interesting (or telling?) that there was again a lot of awards for;

The more telling area would be ‘social‘. With the rise of social in 2007/8 it makes sense that over the next while there will be more and more social related patents being awarded. What we didn’t see a lot of, that may also be telling, are patent awards related to;

There are plenty of reasons for that, but it’s not something we’ll get into today. This post is going to be friggen long enough as it is. So let’s get on with it shall we?

The Year in Search Patents from Google

Now, before we get rolling, it is always important to note that this journey is more about getting a sense of where search engineers have been spending their time. What actually makes it into the algo ultimately becomes a benefit v cost exercise. Please do note the ‘SEO Magic Bullet‘ post. That’ll help keep you straight.

These are the somewhat less specific areas which are the nuts and bolts of a search system. While not as targeted as the above categories, they do make some good reading. Especially for those just getting into the world of IR. Also, in the ‘ranking methods’ section, you’ll find some that were listed above. In some cases it makes sense to see things from both perspectives.

While I was collecting the offerings from this year I thought it might be equally interesting (to me geeks of course) to look at the last 3 years of round-ups and put them ALL into one page. It is staggering the amount of information we have here folks. Look at the geo-local section alone; reading ALL of those would be one heck of an undertaking.

Anyway, here’s the last two years worth of round-ups;

I hope at least a few folks find these useful… My advice is to pick one area to start and begin reading through. Those skilled in the art will find GREAT things for future proofing your SEO… ’nuff said.

Also, be sure to see the rest of the series including Microsoft Patents 2011 and Yahoo Patents 2011 (coming over the next couple days).