Does Google give big brands a pass?

While wandering the halls of Facebook yesterday, I came across this; 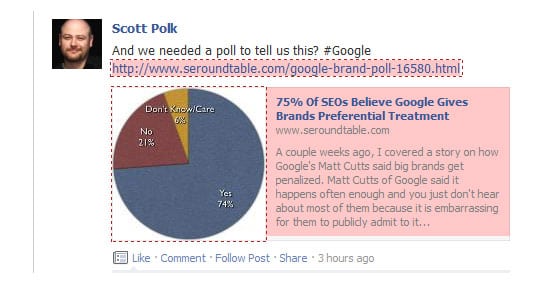 Which was referencing a post over on SER about Google and Brands. There has been a long-standing thought train in the SEO world that brands get an advantage from Google in the form of rankings or penalization issues. Seriously, just look at this SERP.

But is this truly the case?

This one is the easier of the two folks. I can tell you for a fact that I have never seen mention of ay type of algorithm in a patent or research paper, that seeks to add some sort of boosting for a given entity. Indeed it would make little sense to even do that because then you’d need a room full of monkeys coding in brand name after brand name.

What likely is the case is that brands tend to have;

It is merely the result of the myriad of other signals and scoring mechanisms which Google uses to display search results. We can also add to that the fact that a lot of larger brands have hopped onto the SEO bandwagon over the last decade and generally have larger budgets to throw at it.

So onto the next roll of tinfoil. Do the larger brands get a pass or preferential treatment when it comes to penalties?

Again, I’d say no… or at least “not really”. As Senor Cutts intimated recently at SMX, it indeed does happen, but it just isn’t publicized. In fact, unless some astute SEO actually picks up on it, it will indeed fly under the radar. The brand in question isn’t about to start telling the world (and potential investors) that it’s happening.

As someone that has done a lot of consulting to companies that get whacked, many of them being known entities, it probably happens far more than most believe. It just isn’t widely reported. Actually, now that I think about it… do small brands report when they’ve been whacked? Probably not. It is what it is…

Now, do they ‘seem’ to be able to get out of the penalty box easier? Entirely possible. I have managed to get large brands back in faster than smaller offenders. Why? One would assume the quality control aspect that some companes are expected to show up in the results.

If I had to choose

All of this being said; which would I choose? That’s a bit of a no-brainer and any SEO that’s worked a larger brand knows that it is indeed a lot easier to rank things with a larger brand. You can probably sneeze at a new keyword and get it ranking in fairly short order. That of course, often depends on the existing strength of the domain and SEO readiness of the site.

The flip side is that a smaller entity (SMB) can often be more nimble and getting things done is far easier. Large brands tend to move like sloths and at times one wonders why they even bother making recommendations since it can take months to be acted upon, if at all. There’s advantages to each.

At the end of the day it’s not really Google giving brands preferential treatment. It’s the simple fact that they have more authority.