Today the folks over at Google announced some tweaks to how they handle TITLEs in; Better Page Titles in Search results.

“We use many signals to decide which title to show to users, primarily the <title> tag if the webmaster specified one. But for some pages, a single title might not be the best one to show for all queries, and so we have algorithms that generate alternative titles to make it easier for our users to recognize relevant pages. Our testing has shown that these alternative titles are generally more relevant to the query and can substantially improve the clickthrough rate to the result, helping both our searhers and webmasters. About half of the time, this is the reason we show an alternative title.”

This is something, for those that didn’t know, that they have been doing for some time now. Before that we saw them doing pretty much the same thing for the snippet. They’d not always use the meta-description, they’d pick their own. So what’s the change? Not really sure. 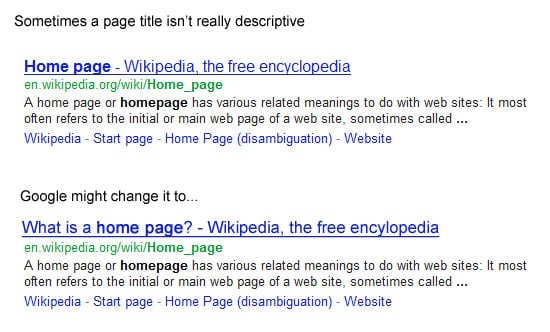 “Other times, alternative titles are displayed for pages that have no title or a non-descriptive title specified by the webmaster in the HTML. For example, a title using simply the word "Home" is not really indicative of what the page is about. Another common issue we see is when a webmaster uses the same title on almost all of a website’s pages, sometimes exactly duplicating it and sometimes using only minor variations. Lastly, we also try to replace unnecessarily long or hard-to-read titles with more concise and descriptive alternatives. “

With a link to an updated Help Center Article on the topic.

This can actually be a handy thing for websites that have problematic content management systems which produce large numbers of duplicate title’s and so on. While some SEOs might get pissed because they lose an element of control on the targeting, but I haven’t seen it happen in a lot of cases where this would be a problem.