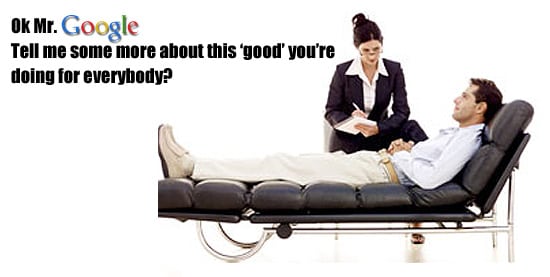 Google’s internal conflicts are expressed in many other areas as well. It used to embrace its informal “don’t be evil“ motto, but at the same time as a publicly traded company they have a legal obligation to be, well, evil. (Profit maximisation is not a moral attitude to have, no matter how you look at it.) Google’s growing – and legally required – greed is evident in how they approach their cash cow AdWords, as well as in their tax evasion tricks (which may be entirely legal but would be hard to justify as morally right). Yet I don’t doubt that most, if not all, of Google’s employees genuinely believe they work for a ‘good’ company.

And then of course we have SEOs own pet peeves: Google’s continuous algorithm adjustments. Google claims its search algorithm has no editorial bias and that it favours great content above all else, but at the same time we see plenty of evidence of manual adjustments being made to the black box from which Google’s SERPs “˜magically’ appear. And one might argue that any algorithm change that favours one type of website over another is, in essence, a manual editorial preference being expressed.