This year seems to be off to a rough start for Google. They’ve stubbed their corporate toe a few times, and at a particularly bad time, given the extra attention the FTC seems to be directing their way.

Now before anyone labels me a Google Fan-Boi, let me clear something up. I don’t think the sun rises and sets in Mountain View, and I don’t think the Google Collective is above a little self-serving activity at our expense. Regardless of what overall opinion I might have of them or any other entity, though, I tend to try to look at things from both sides and be as fair as possible, on a case-by-case basis.

And this most recent Mocality fiasco in Kenya, while certainly embarrassing for Google, is even more embarrassing for those that are so quick to grab a torch and a rope as they blend into the screaming mob. 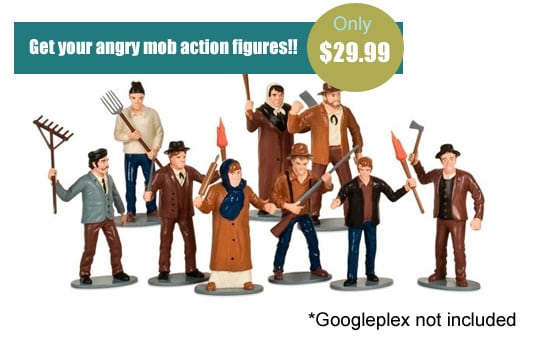 Certainly, this was an occurrence that should have been reported. But while a few simply reported the event, many seemed to revel in shaking their finger at Google, and implying that that was simply more evidence of what they’ve been saying all along”¦ that Google is EVIL.

Let’s try to be objective, okay?

First of all, Google is a business. On top of that, they’re a corporation with stockholders. That means it not only behooves management to do all that is reasonably (and legally) possible to improve the value of the shareholders’ stock, they are legally required to do so. So any prejudice you may hold against them for their size, influence or income level is quite possibly unfair, to begin with. You might want to consider that before you try to use Mocality as an opportunity to exact punishment for other wrongs, real or imagined.

Second, if you’re able to maintain an objective viewpoint, you should be willing to admit that they truly do go out of their way to be fair in how punishment is meted out, as well as to whom. Case in point: their self-penalization stemming from the recent so-called “link-buying“ on behalf of the Chrome browser. An incident that was totally out of their control, and implemented by others, by the way. And that’s not the first time they’ve displayed even-handedness in dealing with penalties.

Back to the Kenya dealings”¦ while you may harbor a sense of distrust of any corporation as large as Google, or be inclined to wear a tinfoil cap when entering a search query, do you honestly believe that the upper management of Google is a bunch of morons? Any ten year old kid would be smart enough to know that what was done with the Mocality database and its users was tantamount to donning a sandwich board with front and back confessions. Sorry, folks, but as we say back home, that dog don’t hunt!

If you feel that Google is hell-bent on world domination, then by all means, fear them, hate them or avoid them. If you think mind control is on their agenda, then run out and stock up on aluminum foil. But at least have the good sense to condemn them with real evidence. Use your critical thinking skills!

Be careful what you ask for

I suggest everybody put away their ropes and torches, and concern themselves with this question:

Do you really want the Federal Trade Commission or worse, the US Congress, deciding how your search results should be structured? I have no problem with penalties for illegal and immoral activities. Pass them and enforce them! But I DO have a problem with any industry being forcibly micro-managed by a body that has NO understanding of that industry”¦ especially when that body (or its parent, sibling and offspring bodies) have consistently proven themselves incapable of even managing their own realm.

Every blog post and article published that implies or downright states that Google is abusing its power or deliberately thumbing its nose at its users, its clients or the government just adds fuel to the fire. Before we do that, I think it’s wise to consider whether we really want that fire or not.