Google on Guest Blogging; be afraid, be very afraid

So here we are again huh? It was just a matter of time. There’s been a lot of chatter recently (what took ’em so long?) about guest posting as a means for getting links. Much of it revolves around the fact that Google is seemingly cracking down on it… 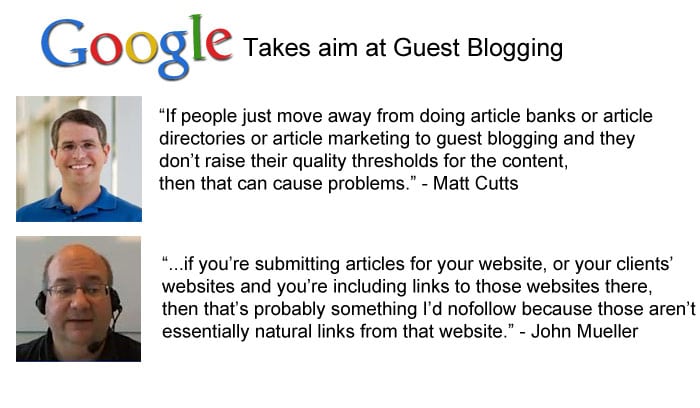 Google: Guest Blogging For Links? You Better Nofollow Those Links ““ in this article it relates some comments from Google’s John Mueller;

“Generally speaking, if you’re submitting articles for your website, or your clients’ websites and you’re including links to those websites there, then that’s probably something I’d nofollow because those aren’t essentially natural links from that website. “

“Think about whether or not this is a link that would be on that site if it weren’t for your actions there. Especially when it comes to guest blogging, that’s something where you are essentially placing links on other people’s sites together with this content, so that’s something I kind of shy away from purely from a linkbuilding point of view.

I think sometimes it can make sense to guest blog on other peoples’ sites and drive some traffic to your site because people really liked what you are writing and they are interested in the topic and they click through that link to come to your website but those are probably the cases where you’d want to use something like a rel=nofollow on those links. “

As for Matt Cutts, he’s also crossed this path recently in an interview with Eric Enge where he mentions;

“The problem is that if we look at the overall volume of guest posting we see a large number of people who are offering guest blogs or guest blog articles where they are writing the same article and producing multiple copies of it and emailing out of the blue and they will create the same low quality types of articles that people used to put on article directory or article bank sites.

If people just move away from doing article banks or article directories or article marketing to guest blogging and they don’t raise their quality thresholds for the content, then that can cause problems. On one hand, it’s an opportunity. On the other hand, we don’t want people to think guest blogging is the panacea that will solve all their problems. ” – Matt Cutts

And this video from 2012 with the highlights;

How will Google treat these in the future?

Is a question I had seen a few times on various posts. Let me give it to you straight; it’s already happening. Given that I do a ton of forensic consulting as part of my world, I see a LOT of various situations where sites get whacked. And if it is a manual situation or algorithmic, such as the Google Penguin, indeed we’ve seen this happen already.

Case One; the company in question did some out reach to some mommy bloggers for a give-away in exchange for a review. As part of the process they;

It all sounds like it’s on the up-and-up right? Passes the Google sniff test? Not so fast. Mommy bloggers being what they are, the ones that actually did do a review, generally added a link or two and often with related or identical anchors to the theme of the product they were given.

End result? The website in question actually went DOWN on the term that they were being linked to with. Huh. So I decided to contact a Googler about it given it wasn’t a client, just an SEO Dojo member, (no folks, I will never talk to Google on a client’s behalf…sorry. Too douchy).

When I brought up the situation and my concern that they indeed weren’t trying to manipulate the link graph in any way, the Googler highlighted some of the blogs in question saying they weren’t very trust-able and had a “every other post is a paid post” feel to them.

Case Two; In another instance I was privy to lately, the company in questions hired an SEO to do some link building for them. The bulk of this program was of course, guest posting. They put out some 20-30 or so posts over a 2-3 month period. These posts were avg in quality and the locales they posted them on were, by my standards at least, sub-par.

End result? The site started to move up on teh various phrases being targeted in the campaign, (2-3 or so) as did the referrer traffic on Google for those terms. Then came Penguin 2.0. WHAM! At that point they dropped back down to earth. To slightly lower traffic levels than prior to the guest blogging campaign.

I could give some more examples, but suffice it to say that we’ve already seen some issues as far as guest blogging/posting is concerned. If anyone tells you otherwise, best to consider the source (usually those peeps sell guest posting or link building services of some kind) 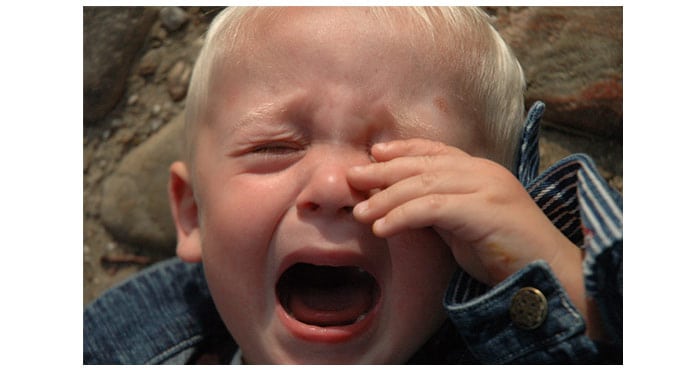 Is this the end for guest posting?

Yes… and No. Indeed, like Google, I tend to use that kind of response a lot. Indeed there is every reason to believe there is some inherent risk in this type of tactic. But that’s the same with all forms of link ‘building’ at the moment. I’d venture to assert that if you’re doing the mass emailing of blogs without some form of vetting, you might wanna’ stop that.

If you’re leaving an obvious footprint, you might want to avoid that as well. Some things that come to mind include;

Now, let us consider a different concept; the secondary affect.

If your goal is to ‘build‘ links, you might want to consider ‘attracting‘ links. How would we do that? Start to treat the guest blogging campaign as a way to garner a larger audience and to build authority. You can use the outreach and guest posting campaign to actually drive traffic to your own site/blog. This means we don’t actually care if the nofollow attribute is on the post. What we really want is to build an audience to our own site, in the hopes that our own future posts (on-site) will be able to attract links to our own offerings.

There’s an algo for that?

Probably not. This is much like the argument many have as far as how Google treats brands. It doesn’t make sense to write an algorithmic method to seek out blog posts in isolation. What is seemingly more likely is something that looks at the link graph from elements of trust and authority. Consider some of Matt’s statements as far as ‘low quality or thin content‘ and ‘duplicate or spun content‘ as well as the ‘authority‘ of the author (entity graph).

That’s more for a Penguin situation of course. They indeed might have some tools or have trained staff to look for these kinds of elements when it comes to manual actions such as an unnatural links action. Let’s look at a relative situation such as this site you’re on now;

What makes SNC authors different than a guest poster?

Now, compare that to some of the elements we’ve already highlighted in identifying an outreach campaign for links earlier in this post. Quite a difference. As long as you’re not completely brain dead, I am sure you can start to see how Google might differentiate the two. 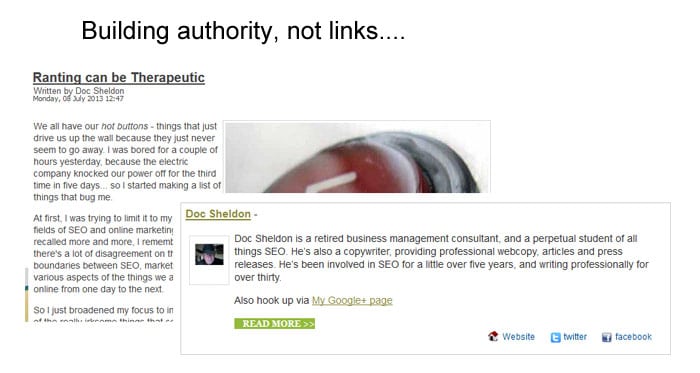 I was originally going to also write about how I think Google might go about this as well as things you can do to protect yourself, but I decided that was probably an irresponsible thing to do. Why? Just look how we got here in the first place. A few folks started writing about guest posting (for links) and then a bunch of crap-hats ran the concept completely into the ground… I still get a few emails each day from dumbasses.

I shall leave you to figure it out. If you screw it up? You know where to find me.

Right then… I’m sure you want to know; can I do guest blogging for links? I suppose you can, you just have to be more careful with how you go about it. But that goes for all forms of link building. That’s why I prefer the concept of ‘attracting’ links, not ‘building’ them. We’ve seen Google penalize and/or devalue links from past campaigns. Be warned; just because you aren’t getting spanked for ’em today, doesn’t mean you won’t be some day.

Oh and hey, from the “I told you so“ file… see my earlier posts on this;

I also came across this video from Matt Cutts around the same time as the above one… and this time he kind of intimates a few other important ‘trust’ elements;