“… we’ve heard complaints from users that if they click on a result and it’s difficult to find the actual content, they aren’t happy with the experience. Rather than scrolling down the page past a slew of ads, users want to see content right away. So sites that don’t have much content “above-the-fold” can be affected by this change. If you click on a website and the part of the website you see first either doesn’t have a lot of visible content above-the-fold or dedicates a large fraction of the site’s initial screen real estate to ads, that’s not a very good user experience. Such sites may not rank as highly going forward. “

First off, a little birdy told me earlier this afternoon that, “Google’s going to be announcing a Panda update today around 3 PM PST“. And then of course this news broke. 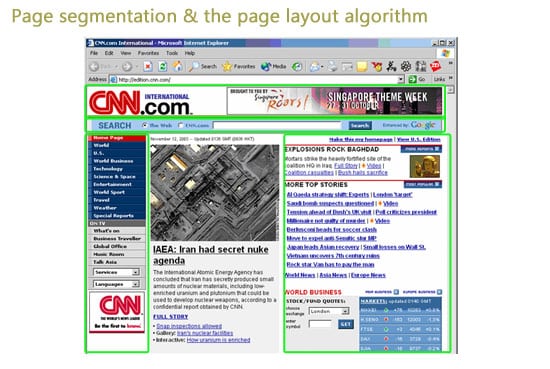 We really had no idea if these types of approaches were ever adopted, but given their multipurpose abilities, it seemed a safe bet. And now we have a name even; the page layout algorithm. If you haven’t considered it in the past, be sure to read those posts listed above. Now they we have further evidence that page segmentation of some kind is indeed in play, we can also revisit it for link valuations (certain parts of the pages being more valuable than others for links).