There was a post earlier today from Google stating that they’re ramping up the social elements in the SERPs.

For those not following closely, Google started it’s social search elements (as a vertical and as a universal). Social and real time search have been making waves since 2009 or so. None of the major players really lasted. Even interest in Google’s, has been luke-warm.

When I think of Google ‘social’ there are many levels. If we look at the now defunct SearchWiki, we see an element of social voting. When I think monetization of social, I harken back to Google’s social profiling patents. Some social graph anyone? It helps to think vertically for some context on things. 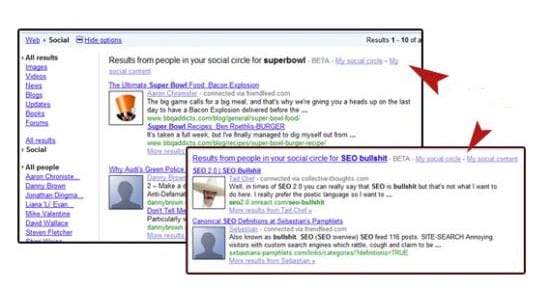 This is what some of the early approaches looked like. And from what we know they’re attached to your ‘social circle’ and ‘social content. Want to see yours? Go here.

In there the connection are from Gmail, social sites and websites even (via Google Reader). That is a hint at what they’re doing with the social graph. And you can make sense of most of that watching this;

Google Social; the next generation

Today Google announced that it was blending the social results right into the SERPs. Where and when isn’t certain, but they said it would be, “mixed throughout your results based on their relevance “. While this obviously affects rankings, that is more in-line with what we’d see with personalized search; not the same for everyone.

They have also expanded the system to include notations from Twitter folks and ‘other sites‘. 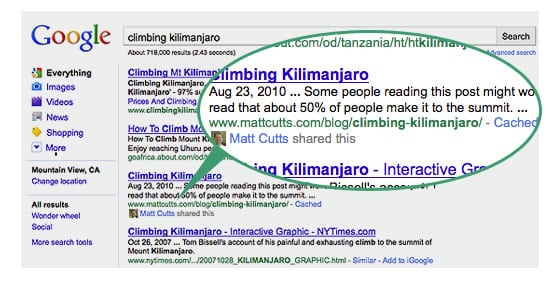 One of the core problems with Google and social is the management aspects. In the past you would put your connections in your Google profile. They noted that this will also be something you can do from your main Google account page as well. It must be said that the connections and ‘friends’ management is still about as weak as ever.

On a more interesting note, Search Engine Land is reporting that there is still no Facebook ‘likes’ being incorporated, if that’s because of Microsoft’s involvement with FB, is anyone’s guess.

Are we there yet?

Can Google be a social search engine? This was the question back in 2009. Are we there yet? A few people I know have said that just because they follow someone, doesn’t mean they necessarily trust their judgement on certain topics. Other times is may be noisy due to a poorly constructed social profile/network. Regardless of the reason, there really needs to be some way to throttle the fire hose.

That being said, this still is a form of personalization, as is mobile. It is interesting to see Google constantly thinking personalization beyond mere search history and behavioural data. While this move today may not seem like much, it does show more of what the future in search will look like.

Here’s some past musings on it;