Google’s Algorithm Leaked! – A ‘What If’ Story

As a kid, I read a lot of comics. And, to clarify “a lot”, we’re talking about boxes and boxes of comics, Marvel trading cards, piles of cardboard backings and plastic comic book protectors. Of course, let’s not forget stacks of attempts at duplicating Jim Lee’s X-Men, Sam Kieth’s Wolverine, Todd McFarlane’s Spawn, and Rob Liefeld’s Cable.

One of my favorite series was the “What if” collection, where an alternate reality is imposed on character, creating a new paradigm, and the “new” reality is played out. 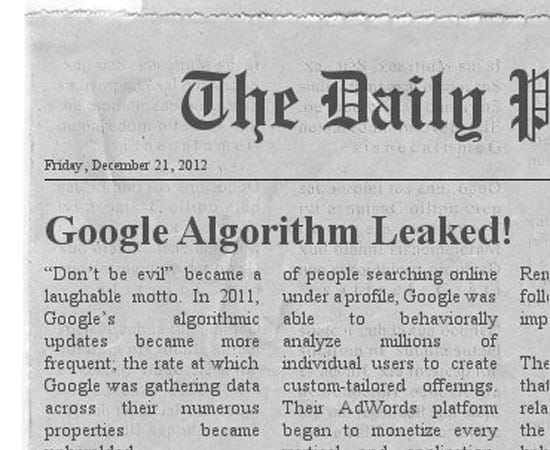 What would SEO and Search Marketing look like? Would they still exist, would our profession even exist? The search geek and the comic geek in me couldn’t resist the idea to play this out.

So, today, we’re going to examine what would happen to the search world through the lens of an alternate reality where Google’s complete algorithm is released in to the wild.

“Don’t be evil” became a laughable motto. In 2011, Google’s algorithmic updates became more frequent; the rate at which Google was gathering data across their numerous properties became unheralded.

Google transformed itself from a portal to discover the web to becoming the total web experience. High jacking consumer search verticals like air travel, hotels, and credit cards, and began to slowly spiral out into other verticals like medical insurance and home mortgages.

Thanks to years and years of people searching online under a profile, Google was able to behaviorally analyze millions of individual users to create custom-tailored offerings. Their AdWords platform began to monetize every vertical and application, bending and breaking how and when advertisers ads would be displayed.

Small businesses can no longer compete online, crushed under the weight of an ever-increasing advertising expense, algorithmic changes that heavily favor larger corporate entities, because as Eric Schmidt said, “Brands are the solution, not the problem”.

After years of side-stepping lawsuits, and cozy government relationships on Capitol Hill and with DoD, Google had become what was inevitable: evil. Google saw everyone as data that was to be mined, analyzed, and sold.

And, then it happened.

A top-level executive disillusioned with what he had helped to build, leaks Google’s algorithm into the wild.

What Happens to SEO?

Within hours the leaked algorithm spreads across the web.

Debates rage on in forums and offline amongst SEOs whether the algorithm is indeed genuine or an elaborate hoax set out by Google to “trap” SEOs.

Immediately, Google denies any knowledge of a leaked algorithm. Messaging from inside the Plex: “It simply didn’t happen. What is out there is a total and complete fabrication.”

Weeks after the initial leak, blog posts begin to appear that provide insight, co-authored by SEOs and mathematicians jointly. These posts translate the select pieces of the leaked algorithm from their complex mathematical equations to the elements SEOs and search marketers look to optimize on-site and off-site, quantifying long sought after values.

The Plex goes dark. Google refuses to answer questions from the national media and search media alike, they hold steadfast to hoax, and the debate continues.

With the startling and stunning results of first few blog posts that crack the algorithm; the SEO community begins to invade academia quietly. SEO firms begin to hire in-house mathematicians, breaking down the algorithm into its individual components.

Within weeks, these client sites begin to hold stalwart positions in the results: from highly competitive head terms to long-tail terms.

Miraculous and nearly incredulous white papers boasting unheard of results begin to appear out of thin air on a handful agency sites. The cracked algorithm begins to leak out to the rest of the community months after first-movers, but in only small drips of knowledge.

Discontent begins to fall over the search marketing community, as the real and verifiable rift of those in-the-know and those out-of-the-know grows wider. 5 months after the initial leak, a group of Ph. D candidate mathematicians releases the entire cracked algorithm to the public.

The news that Google’s algorithm has been cracked and is being manipulated by a select few finally reaches the general populous.

People begin to flock to Bing and other search engines, as they feel they can no longer trust Google results not to be completely manipulated by the search marketing community.

This, coupled with well-documented despot-like stranglehold on information for over a decade, the world seeks another alternative. Six months after the leak, Google has lost 35% of the search market share in the United States, and over 50% of the market globally.

Bing now owns 50% of the US search market, and gains 30% of the global market share. They post record profits the following quarter, as businesses begin to shift their paid search budgets over to Bing.

SEOs and search marketers begin to divide their attention across both engines, as their clients, seeing the population shift to Bing, want more steadfast and solid results from the engine.

National media begins to pick up the downfall of the giant. This leads to an even steeper spiral of loss. Google, and specifically Matt Cutts, who had been silent throughout the fiasco, makes a major announcement at a search marketing conference that Google will “take back the algorithm” in the next few weeks.

Radical changes will be instituted to the algorithm, and to quote Matt, “we engineered an algorithm that is 90% new, which completely re-evaluates how we view trust, authority, and relevance of websites and web pages to queries”.

In that instant Google admitted the leak was in fact real after months of denial. The leaked algorithm makes a quick and furious comeback; cracking it, and quickly, is all that matters now.

At the same time Matt unveils this to the search marketing community, Google holds a televised press conference relaying much of the same information Matt Cutts relayed, and goes further to say that Google will “deconstruct” themselves and return the web to world.

This means changes to the AdWords platform and how they monetize; this also means releasing the stranglehold on controlling the user experience within Google’s borders (including local search and Search Plus Your World functionality).

At the same press conference, Google hints that search marketing industry needs to become regulated in order to help preserve Google’s new algorithm efforts and keep it safe from spam and rank manipulation from marketers. Google alludes that federal regulation may be in the works.

Tight cliques crack, long-standing friendships strain. To heighten the pitch, The New York Times, Forbes, The Wall Street Journal, and Wired all run stories condemning search marketers, in particular labeling SEOs as hucksters, con men, and crackpot algorithmic alchemists hell-bent on manipulating search engines in search of wild profits for themselves, their clients, and contributing to the death of small business in the United States and globally.

Google is painted in the light of sheriff, the guardian of web equality and fairness. After the major media stories, Congress picks up on the scent. Senators start giving impromptu speeches on the merits of regulating this “Wild West Industry”, equating it to lunatics running the asylum. Some go as far as to compare it to a black market trade and industry.

Today, industry regulation is still being battled in court.

In the End: Same as it Ever Was

Google launches the new algorithm, named the Phoenix Update, as it re-evaluates their index with a fresh pair of eyes, essentially starting anew from the ashes. 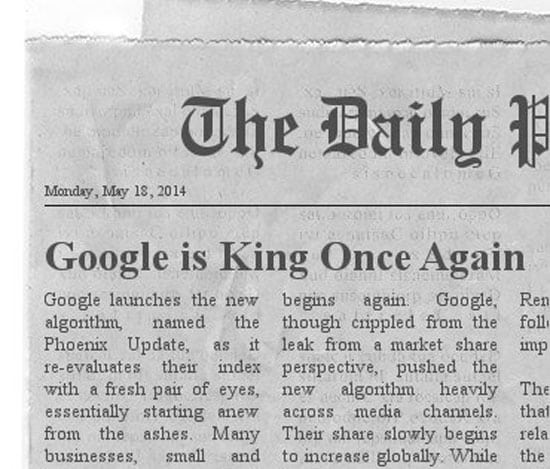 Many businesses, small and large, are devastated. Search marketing took a tremendous reputation blow, causing hundreds of firms to small and mid-sized firms to shut their doors permanently.

Within a month, the game begins again. Google, though crippled from the leak from a market share perspective, pushed the new algorithm heavily across media channels.

After a year, Google regains its dominance in search.