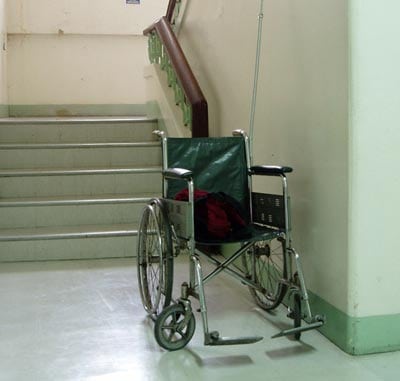 The outcry from advocates for the disabled gained momentum as the day to vote approached, but in the end H.R. 620 was passed and 51 million Americans with disabilities face losing their civil rights again.

In a not surprising outcome, the House of Representatives passed an amendment to the ADA, Title III, which was the backbone businesses relied on to insure they were accessible to everyone. Now, they are no longer required to remove barriers to access unless requested in writing to do so.

H.R. 620 was introduced by Rep. Ted Poe (R-TX) as a response to the increase in ADA lawsuits that erupted over the past several years against businesses and websites. While most were settled out of court, other businesses found themselves in front of a judge. Â Several concerns came about because of this spike, with justification. For example, some law firms would send out scouts to find violations to start civil lawsuits for monetary gain if settled out of court. It was easy to scare a business into compliance, even over something small and easily remedied.

The situation became hot, especially in California. Businesses across the country were paying legal fees to protect themselves. Â To throttle lawsuits, H.R. 620 was written as an amendment to the Americans with Disabilities Act. Â From the start, the way H.R. 620 was written was clumsy and unclear. Anyone unfamiliar with the ADA would have seen through the wording of the summary, which alarmingly places the rights of businesses over the civil rights of disabled persons.

H.R. 620 is vague. For starters, it perpetuates the myth that civil action resulted in financial rewards, when in fact, Title III has never offered such money. What it means to be accessible is not defined. The Justice Department defended the rights of the disabled but with this amendment they are no longer involved, or if they are, not until there is no resolution to a complaint after an unspecified amount of time.

For the past nearly 30 years the ADA represented the basic civil rights of anyone with a handicap. For websites, we are taught that generally all .gov and .edu sites must meet Section 508 standards. In fact, Section 508 was just recently updated to meet today’s current changes with technology and computer devices. All businesses, on or off-line, if they were smart, paid attention to either Section 508 or WCAG guidelines for the simple reason that inclusion means more happy customers and users.

However, accessibility for websites was largely ignored until the lawsuit era included websites. Suddenly software applications had to work for everyone, but few companies have developers skilled in coding for accessibility. So, websites became another easy mark for unscrupulous lawyers. Businesses with websites suddenly began looking for accessibility people and there were not enough of them trained for the work. They were easy targets.

H.R. 620, officially called the ADA Education and Reform Act, intended to provide support for this situation, but instead it only confused everyone. The way it is written, the responsibility of businesses to provide access to handicapped persons falls to the disabled person rather than the business, thus undermining the nearly 30-year-old civil rights law created to prevent discrimination.

With H.R. 620, if someone is prevented from making a purchase, entering a store, reading instructions, and much more, the disabled person must request access in writing. The wheelchair bound person must ask for access. The veteran with missing limbs must write a letter requesting access to something that someone with limbs can get to with ease. The blind person who wants to download a coupon must write a letter to the store owner. The person who can’t see the instructions on a form or figure out how to use an application because they have cognitive issues must take the time to write a letter and ask for help.

First, Let’s Create a New Plan to Protect the Business

This letter serves as the first notice to a business that there is an issue. The business has 60 days to respond to the letter and after that, 120 days to make an effort to comply. Critics claim that “making an effort” can take years and that there is no way to enforce compliance because the disabled person is not permitted to get legal representation while waiting for a resolution.

“If they don’t comply within the time period, then file the lawsuit,” he said. “Go after them. But businesses should be able to have the notice of what the problem is so that they can fix it, which is the goal of the ADA.” The bill’s author Rep.Â Ted PoeÂ (R-TX).

The so-called education referred to in the title of H.R. 620 calls for time by the government to devise a plan for how to train people in accessibility and educate businesses on how to be accessible. It is referred to as a “model program” requiring fact-finding and official steps taken before litigation can proceed. The ACLU, among hundreds of other disability rights advocates, find this to be a delaying tactic that benefits the business.

The Judicial Conference of the United States shall, under rule 16 of the Federal Rules of Civil Procedure or any other applicable law, in consultation with property owners and representatives of the disability rights community, develop a model program to promote the use of alternative dispute resolution mechanisms, including a stay of discovery during mediation, to resolve claims of architectural barriers to access for public accommodations. To the extent practical, the Federal Judicial Center should provide a public comment period on any such proposal. The goal of the model program shall be to promote access quickly and efficiently without the need for costly litigation. The model program should include an expedited method for determining the relevant facts related to such barriers to access and steps taken before the commencement of litigation to resolve any issues related to access.

Logically, if you were a customer and asked to write a nice letter requesting help with a task you are prevented from having access to, and wait 60 days for a reply, you would more than likely refuse to be a customer. But in the event you did receive a response, you must wait another 120 days to allow the business to try to fix the problem. They are not required to fix it. They have 120 days to show they tried. After this, the amendment is unclear about the next step.

When I had my knees replaced and required a walker and cane, it was procedure to be given a temporary handicapped parking permit by the hospital. I never used it, but what if someone with a temporary handicap comes across a barrier to access? There is no recourse for them the way H.R. 620 is written other than writing a letter. They could be healed by the time the business responds. I have found government websites that are impossible to use, especially at tax time. State governments have their own rules for ADA compliance, which H.R. 620 does not touch.

In fact, it does not mention website accessibility at all.

The Obama Administration had promised to come out with official guidelines for website accessibility. That did not occur, so the promise rolled over to the Trump Administration, who decided they are not delivering on that promise. Â Â According to Assistant Attorney General Stephen Boyd, they are evaluating whether accessibility standards are “necessary and appropriate.”

The rise in lawsuits included companies that conduct business online and H.R. 620 does not address website accessibility in any way.

H.R. 620 includes the directive to gather information to learn about accessibility and create educational and professional support by training people and businesses and creating a program.Â  What puzzles accessibility professionals is the House ignored the fact that the guidelines and standards are available online for free by the World-Wide Consortium, that tech and software companies already design for accessibility, that the operating systems for Android and Apple are designed to be accessible, and testing for accessibility has been around for years, with the help of tools and assistive technology. The budget for their new planÂ calls for a budget of 18 millionÂ to create something new.

The trigger issue was with the legal system and lawyers that should be reported to the Bar Association.Â  Adding to the lack of transparency and purpose of the amendment was a related bill about banking and mortgages attached to H.R. 620 that was tossed in at the last moment.

Several questions remain, in addition to how businesses, on and off-line, must comply with the ADA standards. It is unknown if there will be restrictions on hiring disabled persons, how their proposed new program would work with state and local accessibility rules and requirements and consideration for accessibility laws and standards required by countries outside the USA. Â Â While there is no official worldwide accepted standard for accessibility, most conscientious companies follow the guidelines from the WC3 and those prepared by their respective country, state and local government.

For 51 million citizens of the USA who face discrimination, they are about to be dealt a terrible blow if this passes the Senate and become the new Americans with Disabilities Act.

US House Votes to Revise the Americans with Disabilities Act