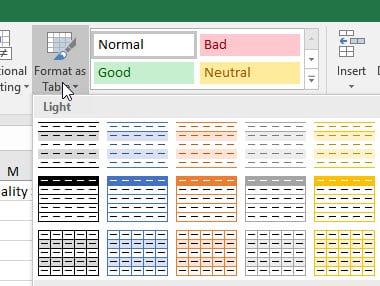 One of the hardest things to do when trying to maximize the ROI on an AdWords campaign is identifying keywords that are under-performing, costing you clicks and money while not delivering the conversions that you’re looking for. Many people make the wrong assumption that the only keywords that they need to prune are those that don’t have any conversions. While this is sometimes true, it’s a simplistic way to look at things and can leave you paying for clicks that cost more than they’re worth.

Before we can identify the keywords we’re looking for, we need to have our goals in place. Without these goals, we have no idea whether we’re doing well or not. Fortunately, this can be a simple process. For this discussion, let’s assume that we have a cost per conversion target of $8 per conversion and a target conversion rate of 2.5%.

This gives us two variables to look at while trying to identify which keywords are working well and which ones are not.

The next step is to pull our keyword data into a spreadsheet so that we can sort through all of the data easily. Log into your AdWords account, select a campaign, then the AdGroup you want to audit. Once in your keyword list, we need to modify the columns to get the information we’re looking for. Along with the standard data, we want to include the conversions, conversion rate, cost/conversion, quality score and the Estimated first bid position bid. 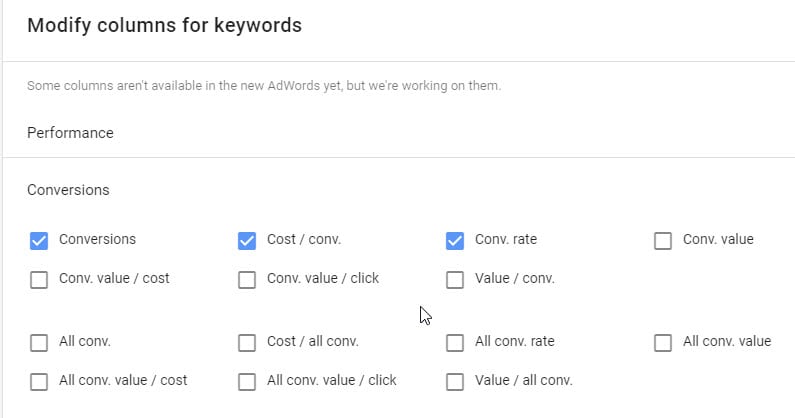 Next, we need to set a large enough date range to make the numbers statistically relevant. On larger accounts, I like to set the range to monthly, but medium or small accounts can do this with a sample of 3 or even 6 months.

Finally, we need to export the data to Excel. This will allow us to sort the data quickly and easily get rid of any keywords we want to remove.

The first thing we need to do is convert the spreadsheet into a table. We can do this by removing the top 2 rows in the spreadsheet (the title and date range), Then clicking “Format as Table” In Excel.

Now we can start sorting and eliminating anything that we don’t need right now. Sort by “Keyword Status” (usually the first column) and remove anything that is “Paused”. When you select a large data range you’ll often get keyword data from keywords that are currently paused but were active at some point in your date range.

This leaves us with the keywords that we want to look at in detail. 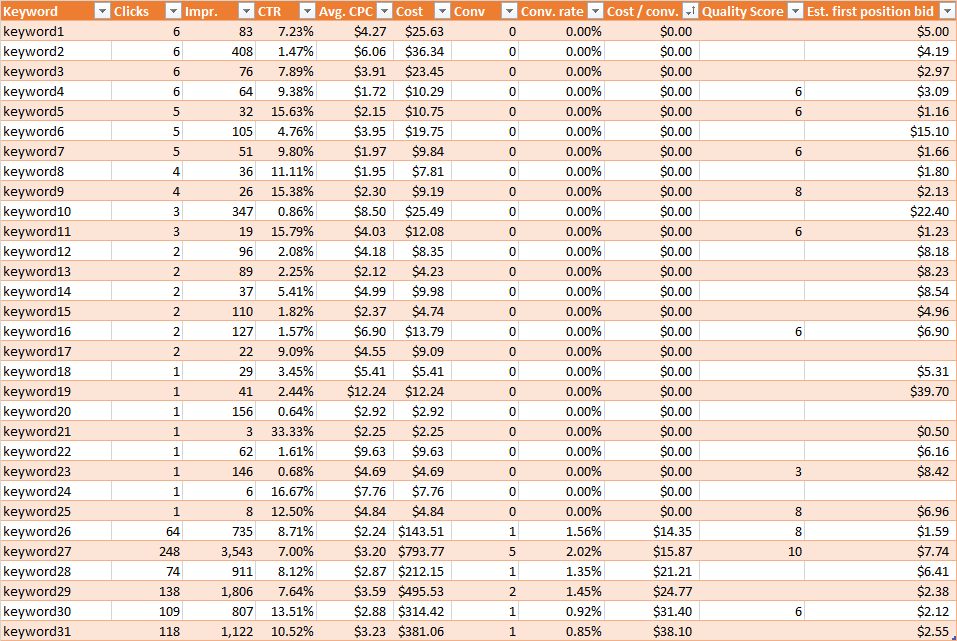 To give us a statistical chance of making the right decision, we need to let things run for a while. In this case, I would let the clicks run for no less than five times the target number, but no more than 10 times. This means that any keyword with between 200 and 400 clicks, but a conversion rate less than 2.5% needs to be looked at closely. Anything below 200 clicks, in this case, can be removed from the list for now. Leaving us with this interesting keyword.

We have the minimum number of clicks at 248, but the conversion rate is only 2.02%. This means we need to look at other aspects of this particular keyword. The cost per conversion is nearly double our goal at $15.87, our Quality Score is a perfect 10/10, and we have an estimated first position bid of $7.74.

Google obviously loves this page, but it isn’t converting with people the way it should. We need to investigate why the conversion rate isn’t where it should be. Is it simply a term we’re bidding on that leads to people who are more interested in information rather than purchasing? Or are we just looking at too small of a data set (only 248 clicks) to make an informed decision about the value of this keyword?

For this keyword, I would seriously look at the landing page and conversion funnel to make sure that this is not an on-page issue. And I would let this one run a little longer, but flag it as one to keep a close eye on.

Let’s look at this other sample.

Here we have a keyword with less than our target conversion rate of just 0.92%, and a cost per conversion of a staggering $31 per conversion vs our goal of $8. But look at that quality score. It is just a 6/10. Six is slightly above average but is very low when we compare it to the 10/10 on the previous keyword.

If these two keywords have the same landing page, this is the perfect opportunity to split them into different AdGroups, or even Campaigns, and create a new landing page targeting this keyword. We don’t want to mess with the 10/10 very much, but a new landing page may help this poorly converting keyword.

Let’s look at one more sample.

This keyword has a lowly 0.85% conversion rate, a massive $38 conversion cost, and no quality score listed. Even though we only have 118 clicks so far, I would be very tempted to simply end this keyword now. If we let this run to the minimum 200 clicks before making the call, it would need a conversion rate of nearly 5% to drag itself up to the minimum. This is an ideal keyword to either pause or move to a pending deletion AdGroup.

I mentioned above the idea of having a pending deletion AdGroup. On larger accounts, I try to run at least three types of AdGroups inside each Campaign. I have the primary AdGroup, then I add a “Top Performers” and a “Poor Performers” AdGroup.

Top Performers are keywords that consistently more than double our conversion rate goal while staying under our cost per conversion goal. As the “top performer” AdGroup grows into an established group, I create a special campaign for this AdGroup, then give it a virtually unlimited daily budget. Since it easily doubles our goals I can safely let it run unrestricted knowing that it will always make money. I still watch it, but this group has the budget freedom to print money for the client.

Poor performers are like the one above. They make conversions, but don’t always hit our target goals. Rather than delete them out of hand, they get moved into a new AdGroup where they can be tested with new landing pages, ad copy, and budgets. If they still continue to underperform they get paused and moved off into a dead keywords file. The worst of them even get converted all the way to negative keywords.

A fine-tuned AdWords campaign is a beautiful thing to behold. It can literally be a free money press if managed properly. But it takes more than just letting some tool pick 3,000 keywords for you and letting Google set your budgets for you. It requires attention to detail and the ability to analyze fine level data like this.

Published in Analysis and PPC

Steve built his first website in 1995 (It's actually still out there). In the years since then, he's transitioned from web development to direct marketing, through SEO and Paid traffic and specializes in helping website and business owners find the ROI in their business. When not helping clients at Steam Driven Media, you can find him creating works of art in wood or pulling a tractor out of the mud. Join Steve on his personal website at SteveG.com