If Pagerank is Dead, I’d LOVE to be Invited to the Wake!

Over the last four years, the death-song of Pagerank has been sung many times by countless pros (such as Robert Scoble, Andy Beal and Don Halbert). It’s been said (since 2007) that Pagerank is dead, is dying, died a long time ago”¦ you name it.

Of course, too many of those discourses failed to point out the great difference between Pagerank and Toolbar Pagerank (TBPR), talking about them as though they are one and the same. They’re alike about as much as cucumbers and can openers are similar. The gist of most of those pieces (referenced below) should really be that TBPR is dying, first as a meaningful metric, finally as even a token indicator. That much, I agree with. TBPR has always been a waste, in my opinion. Repeat after me, folks: TBPRMS! 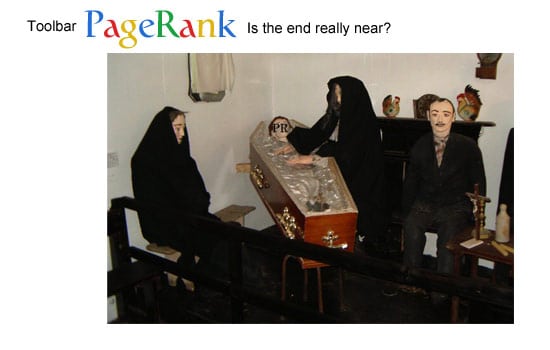 Getting past the ToolBar PageRank

Still, as we all know, there are hordes of people that still chase PR, and a lot of them equate that to TBPR. Many of us have ranted “˜til we’re blue in the face about the foolishness of heeding that annoying green bar. Of course, the world is awash with deaf ears.

Not a day goes by that I don’t see someone going on about their site’s Pagerank, as if they even have a clue what it really is. A buddy of mine coined the term “Myopic SEO“ recently. While that only marginally applies in the context in which he used it, I think anyone that uses “Pagerank“ in their conversations is definitely myopic. They’ve lost sight of some basic realities:

Which brings up the thought, “what could viably replace Pagerank?“ Well, for lack of a name, let’s just call it RelevanceRank. That’s what the SERPS are supposed to be all about, right? Taking a step back, though, we’re drawn to wonder, “if Pagerank disappears, what value, then, will links have?“

To be clear, I don’t think that links will ever lose all their value. They’ve been an integral part of the Internet since we started playing with WebRings in the Internet Dark Ages. They mean something, as they should, in terms of recommendation and citation.

WHAT? Citation? Hmmmm”¦ there’s something to sink our teeth into! Citations are nothing new, of course. Personally, I don’t think they’ve received the attention they deserve from the majority of SEO professionals. There’s great value to be had there”¦ gold, one might say.

But”¦ is there enough meat on those bones for non-linking citations to replace Pagerank as a major ranking factor? Maybe, depending upon their weighting in the algorithm. Still, it seems like something that would be easily gamed, so I’d like to think that the engineers at Google (yes, Virginia, I realize they’re not the only search engine) would think proactively, if not preemptively, and minimize that potential early on.

Yet another possible factor appears, in entities. Probably a by-product of semantic research, and further propelled by the growing importance of social interaction, entities are rapidly taking a place in search. As the social interactions between users and both other users and companies are monitored, catalogued and rated, it becomes more feasible that entities and citations could, in combination, replace active links as factors in establishing not only relationships but reputation.

Could they still be gamed? Of course! ANYTHING can be gamed, at least to some extent. I think the real question is, would such gaming be sufficiently scalable to make it profitable? Frankly, I have my doubts that it would.

A live link, regardless of how it was acquired, is relatively durable when compared to the volatility of relationships. With so many outside factors potentially affecting those relationships, the impact of a misstep can definitely change the risk/reward analysis. At some point, I’d like to think, the prudent SEO will see more ROI elsewhere and act accordingly.

At the end of the day, though, I do think we’ll soon see ToolBarPagerank disappear entirely. Personally, I look forward to the day. And at that point, it should only take five or six years for the rank and file to realize it and find some new shiny thing to chase.

Puts me in mind of the dog chasing a car when it has no idea of how to drive.