Back in mid-May (2018) I was asked by my employer,Â Effect Digital, to compare a potential client’s content strategy against a really interesting competing site, JBR Capital. The site had entered Google’s SERPs in a big way, causing major disruption across relevant UK query-spaces.

What we found was an incredible story of content marketing done right. Now that the information has been deemed non-sensitive, I can get into the detail of this and share it with the lovely readers of Search News Central. Hope you guys find this as eye-opening and interesting as I did – it certainly told the story: go big – or go home.

Author’s note: to be clear, JBR Capital are not my client or my company’s client and we have no business or other affiliation with JBR Capital. They were competing with another company who were thinking about coming on-board with us, so this is non-sensitive competitor analysis.

The Detail – Illustrating Their Strategy

One way we determined JBR’s content strategy was to mesh deep-nav with ascertained keywords on SEMRush. In layman’s terms, to see whether the structure of their contextual, deep-navigation correlated with their ranking positions. Not rocket science, but in this instance, quite effective.

This was their expansive top-line navigation:

Their left-most (most important) entry in the top-line nav broke down into URLs for a multitude of car-brands. This insinuated that their strategy was to go for hundreds of long-tail terms with great content and soak them all up, funneling back to the commercial aspect later. This is a strategy that many talk about in modern SEO, yet which few implement due to the content production costs.

Let’s look at the Ferrari one:

The question became, did these URLs (or their contained child-URLs) rank well for car-brand related keywords on Google?

Let’s look in SEMRush (you’ll need a subscription and to log-in to view this link):

You should be looking at data similar to that which we saw in May 2018. If not, or if your subscription level with SEMRush is insufficient to view the link – here’s an image: 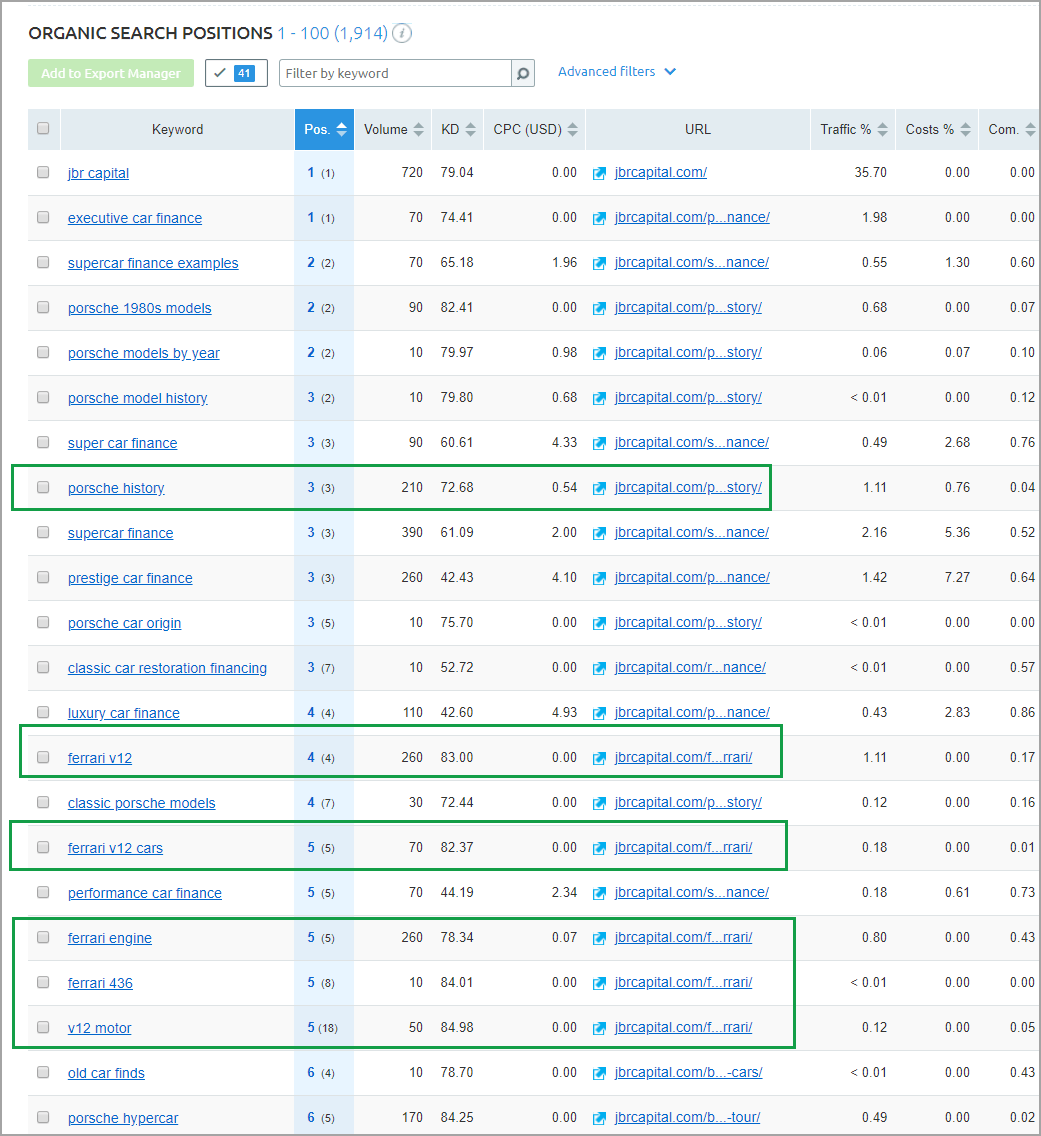 So which URL ‘types’ were ranking the best?

In fact, the nav-link URLs were passing equity down the chain to the content pieces. Here’s an example of that which is still live now: 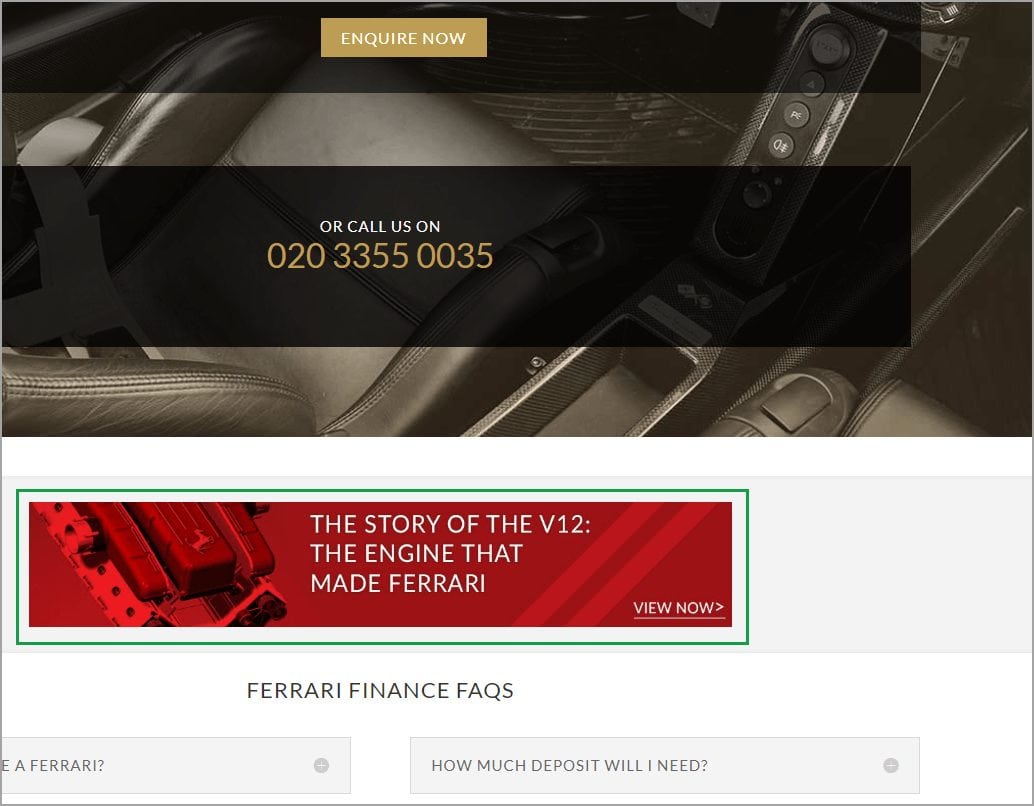 Instead of disconnected tactics, we’re beginning to see the coat-tails of an actual search-strategy here. A really good one too! Map a deep navigation structure against the brands you want to rank for. Create commercial pages which also contain (nested within their architecture) high quality content. Use the menu to give the new content an initial boost, let people find it – then let the content take over and start feeding traffic back to the commercial area of the website (a very impressive somersault). This is just really cool, very well structured, extremely creative and well thought-out content marketing.

I’m not saying that you couldn’t find some evidence of a paid referral-traffic kick-off of some nature. I’m not saying they just set this boat sailing and it achieved everything with no wind in its sails. Still though: this is pretty impressive stuff. When we get to the section on achieved results, you’ll see just how well this approach worked (incredibly well).

Again, the example piece is here and is still live now. 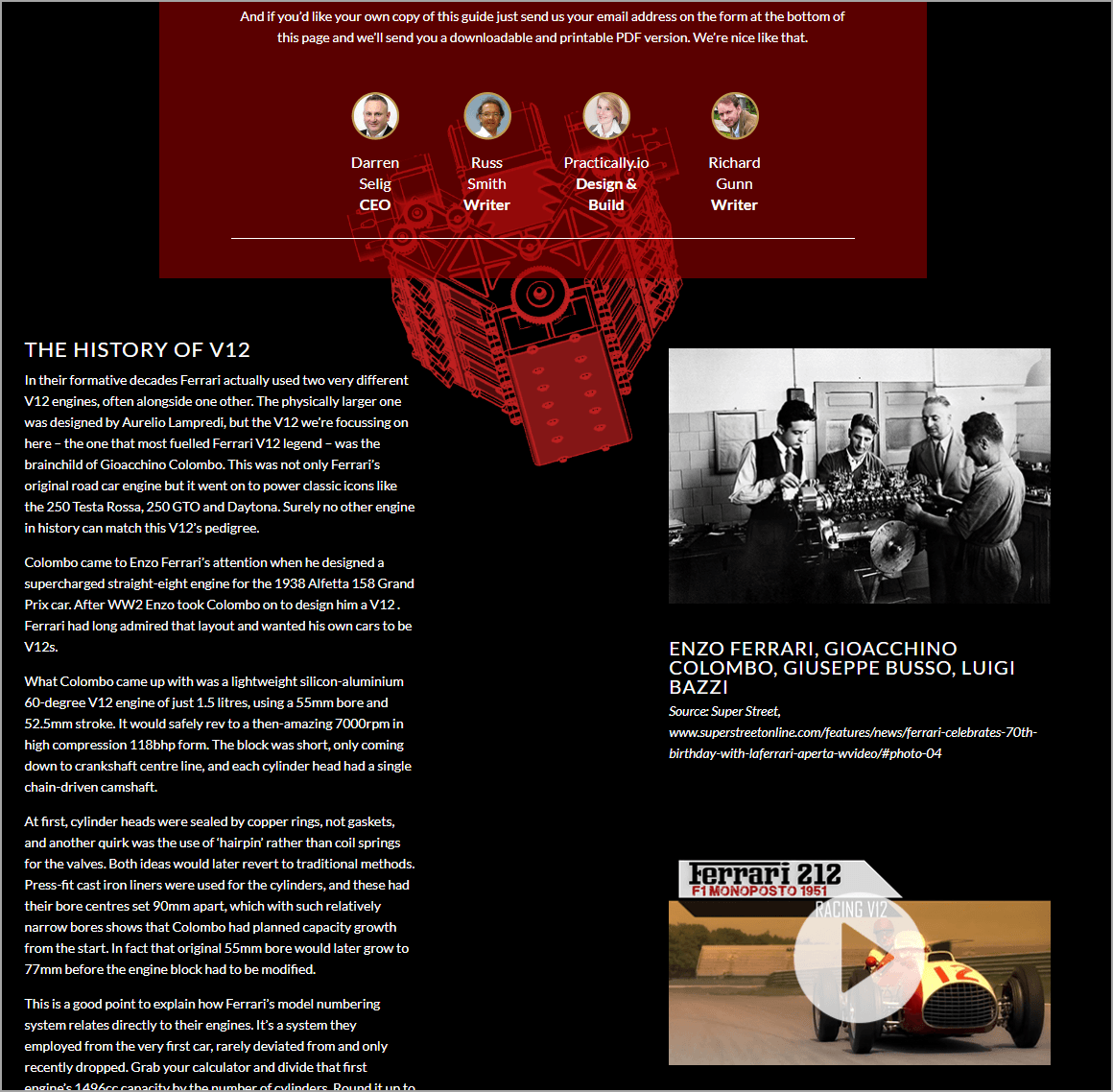 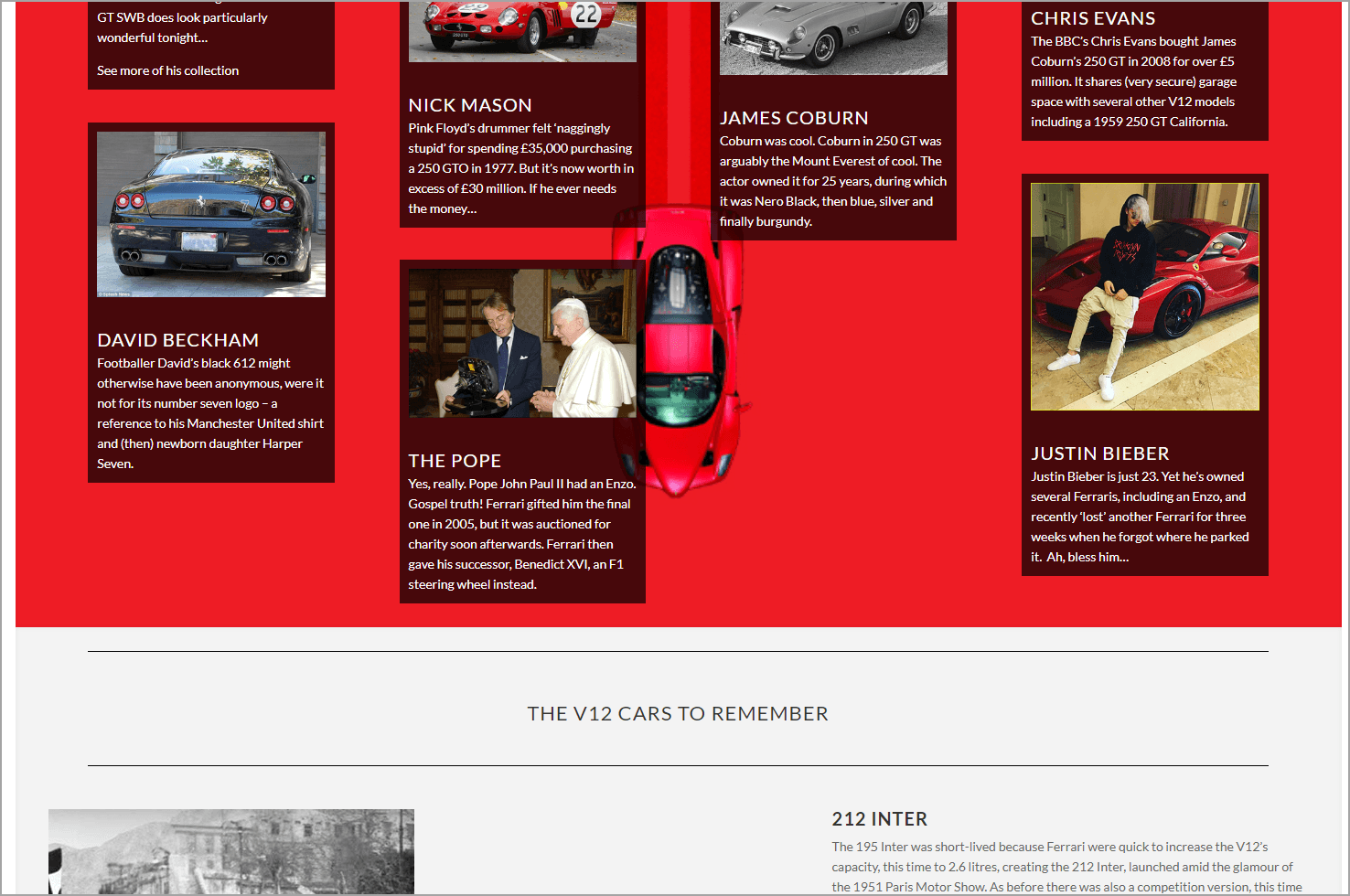 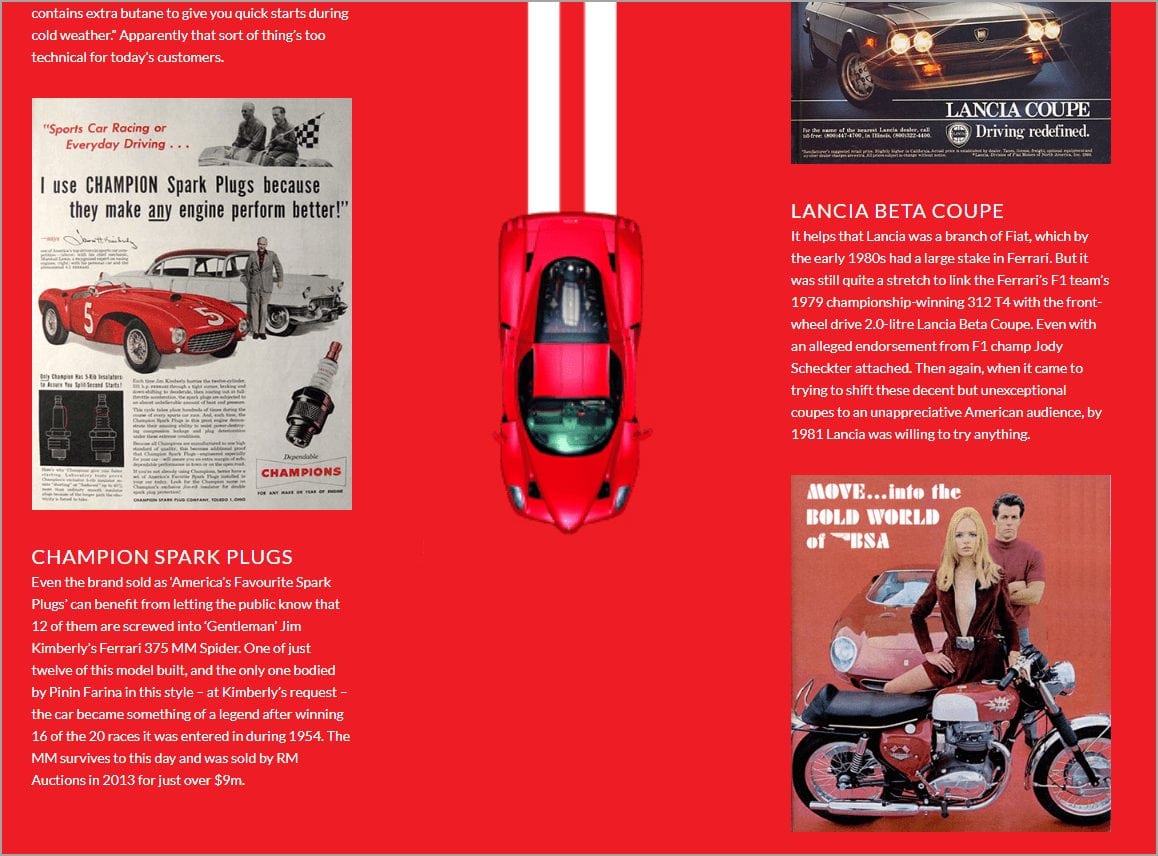 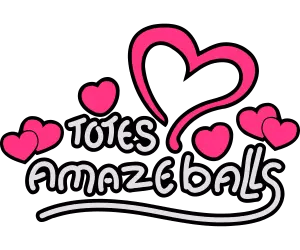 The piece is almost an infographic in terms of style, worked into a really rich article which is unique and which is also:

14,000 words long – are you freakin’ kidding me!? This is like an ACTUAL DISSERTATION on the usage of the V12 engine in Ferrari motor vehicles.

As dry as that would normally be, the unique images and formatting really tell a story turning this content from deep and powerful into something shareable and commercially leverageable. It ticks every box.

This is the best example of on-site content marketing (by its traditional, more text-based definition) I have seen in recent times. Car nuts love to get into the nuts and bolts of what makes their awesome dream cars the perfect ride. Petrol-heads will rejoice at this content and guess what? Petrol-heads own cars. Sometimes expensive ones. This is a tactic known as: “internal content-marketing led lateral audience osmosis”. I may have coined a term for the strategy, but JBR envisioned and implemented it (I haven’t had contact with them, I had no input on this – purely appreciating it as an outsider). This type of content marketing really is the bee’s knees.

It’s important to remember that the Ferrari piece wasn’t the only item created by JBR. Nearly every brand has (or had) one outstanding content piece. Another one of my favourites was the Ultimate Illustrated Porsche Guide. We’re just taking one example in isolation here, but it’s a really great example, so let’s press on.

Let’s look at those SEMRush top-ranking keywords again (circa May 2018): 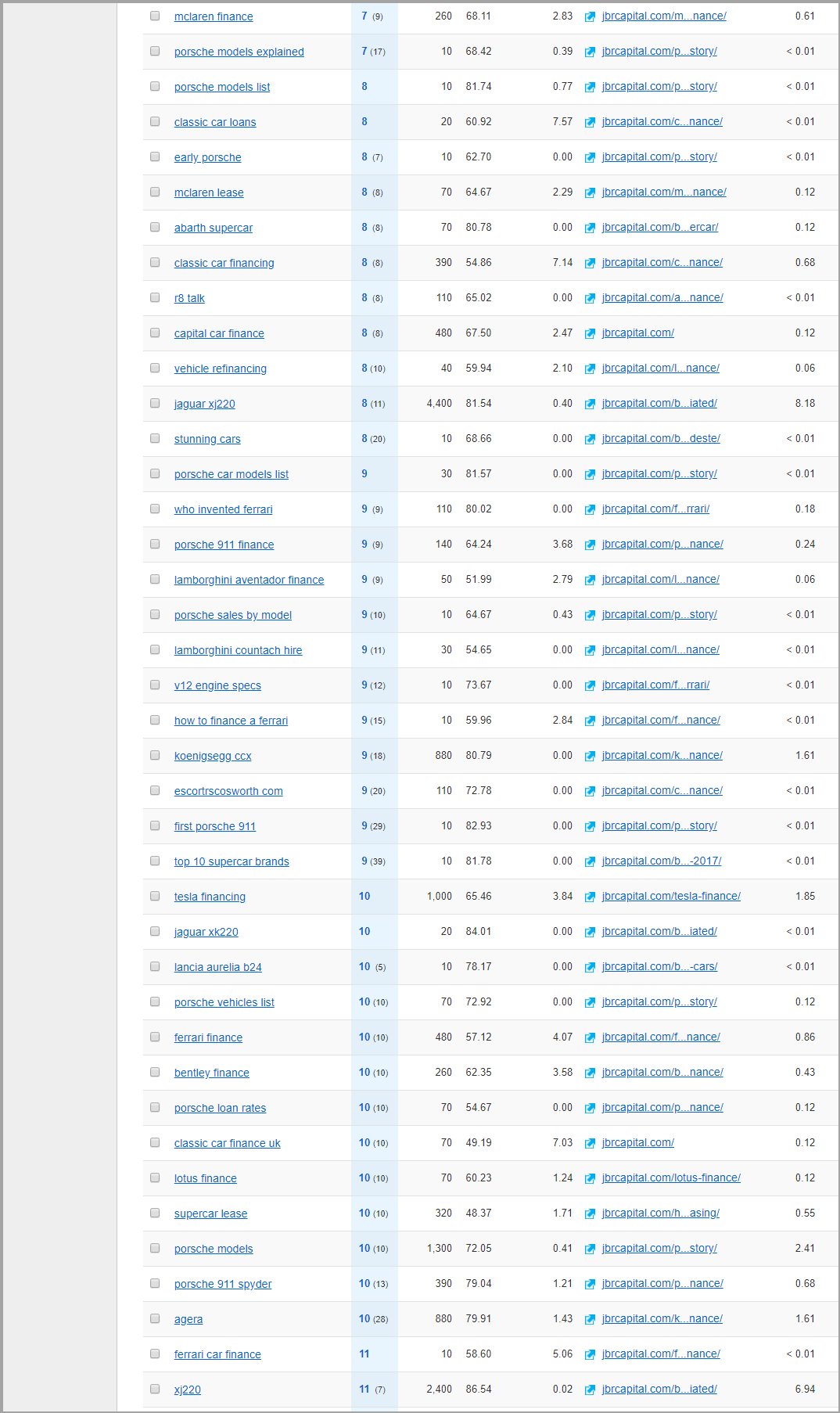 Most keywords were long-tail (less than 1,000 regional / UK monthly searches); they just sucked it all up and rode on that. Many keywords which are not long-tail are more directly relevant (using the word ‘finance’). This was an absolute A-game content roll-out and 100% proof that white-hat, content-led SEO works with the right time and invested effort. It still works in 2018 if your strategy is sound and you’re willing to really invest in content and make it truly superlative.

Back in May, we looked at JBR’s backlink data in Majestic SEO: 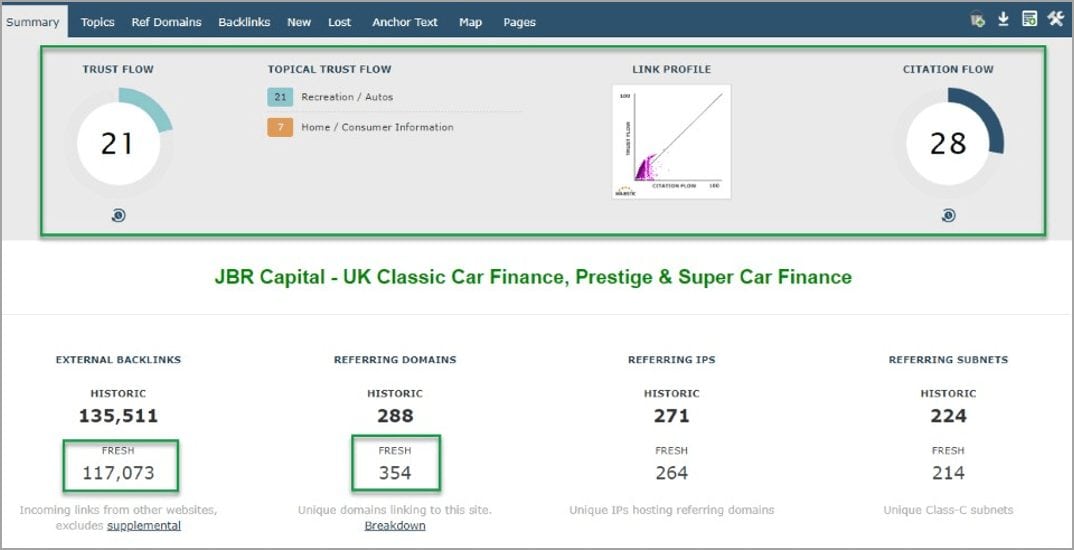 Historically, they had been doing well, but in recent times they had been achieving even more. This hinted that their focus on all this stuff was (at the time) relatively recent (or their promotion of the new content was recent).

Did SEMRush back that assertion up? 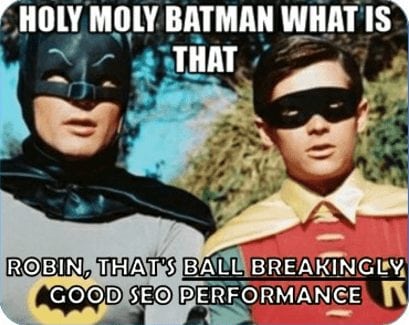 The performance was pretty unworldly for such a short space of time. Yeah I know, SEMRush traffic estimates can be a bit spurious sometimes. Externally this was some of the better data we could get and from memory, Ahrefs was corroborating the same (or very similar) information. Set that against all the crazy ranking movements and you could tell – someone was having a party. If they weren’t, they should have been.

Considering that some of these immensely popular content-rich pages only seem to have existed since 2018:

I’m going to go ahead and say, too many things were adding up for this to have been ‘fake’ SEO performance. In my opinion this was a legitimate win for JBR in Google’s SERPs. It was well thought out, white-hat in nature and it struck to the core of their competitors’ reluctance to properly invest in unsurpassable (against budget) web content. They pulled no punches and won the match.

I still think (even now, a couple of months later) – that performance was literally jaw dropping. It dropped my jaw right through the floor, through the basement and all the way to the big down-under (P.S: if anyone finds my bottom jaw during a holiday to Australia, can you bring it back please?)

So where were all the backlinks coming from?

Most were from sites related to automotive entertainment. Not a giant surprise.

These were (at the time, May 2018) the top linking domains by volume of backlinks:

There are some heavy-hitters in there, especially Piston-Heads which is pretty well known (particularly here in the UK). I wish I had been able to analyse all of these backlinks in more detail, but this was a quick and dirty piece of contextual analysis so there wasn’t time. My feeling is, although many of the bigger links were referring to older pages on the JBR Capital domain, a portion (perhaps a significant portion) of links would have formed naturally – directing users (and search engines) to the new outstanding content pieces.

Here was their anchor-text phrase cloud (from Majestic) as of May 2018:

I coloured it a little. Blue entries revolved around promoting free HD motor-vehicle related wallpapers which people could download. I wanted to explore this more, I’m not sure whether these were hosted on-site or whether they were part of a wider image-based content marketing strategy. I’d love to have looked into that but I just never quite found the time – maybe we can explore this in the comments.

The content was so incredible that it was able to begin drawing organic links from high-profile publications and online magazines (usually considered to be the tier of publications just above blogs, but below authoritative news sources like the BBC). There may have been some small paid referral kick-off (to bolster awareness, not to manipulate search engine rankings) but the content is natural and so is the sterling performance.

All in all, an amazing campaign and content strategy.

But How are They Doing Now?

If we update our earlier SEMRush chart to bring the data up to the present day:

The results still look really impressive. Not only has organic search traffic maintained performance or grown stronger; paid-search (AdWords) traffic also came out of nowhere. In terms of content-led, paid and organic search campaigns I have to say this is one of the best I’ve seen in my 7-8 year stint in this industry.

Well done to JBR, reap the fruits of your endeavours – long may you prosper!

Want thousands of visitors per month? Put in the effort to sculpt and craft winning content. It does work – the internet says so. Thanks for reading, you’ve been a great audience.