It’s all about attribution

On Friday it seems (Google’s) Matt Cutt’s was talking about one of the more prominent algorithm changes (remember, there’s hundreds per year) that we’ve seen over the last while. For those that missed it see; Algorithm change launched

Now, at first blush I didn’t really pay much attention to it. But then I read it a few times and also one of the posts it referenced. The blogosphere and social channels were buzzing about ‘content farms‘ and ‘thin content‘ sites being the focus. But that’s not really geeky enough now is it? Of course not. 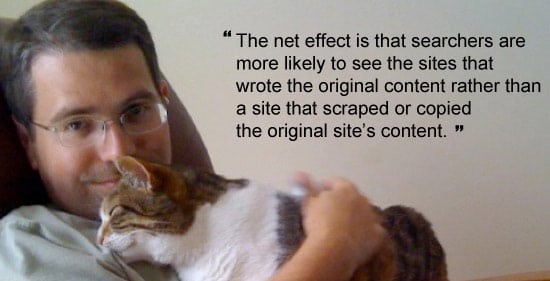 Over the last while there has been a spate of articles declaring Google’s results to be… well… getting worse. Granted, I am talking about the mainstream media as those in the search game have been whining for years.

A few weeks back there was a post from Matt Cutts (Googleblog this time) discussing some things they are working on over at Googly as far as dealing with spam is concerned. Here’s the post and some related postings to it.

Now, as a search geek this stuff does interest me as it’s an integral part of the evolution of search. One would have to imagine that the job of dealing with web spam has gotten a lot harder. Not only can we look to social’s rise into the SERPs (and spam to be dealt with there) but even last year’s Caffeine update which, in theory, means more signals and deeper processing.

But the other shoe was yet to drop, so we wait.

The next week, the post mentioned off the top, Matt made a post on his personal blog detailing some changes apparently related to the earlier announcements. Ok, great, so let’s look at the highlights.

“(…) we’re evaluating multiple changes that should help drive spam levels even lower, including one change that primarily affects sites that copy others’ content and sites with low levels of original content.”

And this time went on with;

“The net effect is that searchers are more likely to see the sites that wrote the original content rather than a site that scraped or copied the original site’s content.”

Matt also highlighted a post on CodingHorror which discussed a situation that had the owner of a given piece of content being outranked by those syndicating it. If it’s a scraper or a legitimate distribution, Google was having a problem attributing the original source.

This is course by inference, should help not only in the logical mistaken identities, but also for spammy less than desirable ones as well. Does that go for cases such as Demand Media et al? Hard to say at this point. I would also have to wonder about link building via article marketing as duplication of the content (past the article site) would theoretically be hurt by this as well.

I’ve been down this road before

What was most interesting to me is that we’d actually discussed this very topic as recently as the summer of 2010 when my pal Samir Balawani was having legitimate feed issues amongst various distribution channels including Facebook and elsewhere. See; How Content Syndication Can Backfire

From what I can see at this point (much of) the algo update is about attribution. This can be via syndication (often legitimate reasons) or (non-authorized) duplication on sites other than the originator. And considering it has been a known issue for quite some time, this is NOT some type of knee jerk reaction. If anything, it might just be some well timed PR (not the Google kind) meant to keep the dragons at bay.

Where’s Google headed with all this?

We can assume there are going to be, as always, winners and losers from all of this. Each and every change over the years has helped some, while hurting others. Our job, as SEOs, is to be the former. I generally call this future proofing.

But what are some of the signs that make this particular set of statements of value? What can we expect moving forward?

More resources architecturally/ processing wise ““ last year Google’s major move (search geek wise) was the Caffeine infrastructure update. This means, in theory, they not only have the resources to start processing new signals, but we can also surmise more tools for dealing with (web) spam.

More resources in Matt’s department ““ also of interest, was a statement from Matt at Pubcon that they were getting more resources/staffers back from ‘other projects’. That will also help things no doubt and does show a concerted effort on their part to beef things up.

All in all, I do get the feeling that the search quality (and derivative web spam team) have a small fire under their backsides right now and this latest (public) algorithm change is in response to that. Will there be collateral damage (false positive)? Sure, usually is. Will there be winners and whiners in the SEO world? Deffo can count on that. But I personally have talked to a lot of people that believe things are improving, (othes aren’t so sure).

Anyone remember the SERPs of yesteryear? Not very pretty. I for one am happy about this change as it can help legitimate programs, it’s not all about chasing spammers (hopefully it helps with proper attribution).

Note; search geek or not, if you’re interested in helping reduce spam, Matt suggests adding this Chrome extension to your arsenal.