Marissa Mayer Moves On ““ New Life for the Y!

In case you’ve been living under a rock for the past week, Marissa Mayer, former Vice President of Local, Maps, and Location Services, was appointed as President and CEO of Yahoo!. 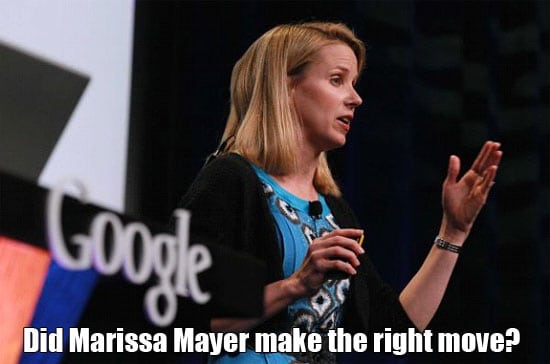 Twitter, Facebook, Google Plus, and the Blogosphere have been blowing up over the news with many saying she’s too inexperienced for the job. While some say her lack of experience is the biggest issue, others say it was a bad move (career wise) given her position at Google.

As a fellow Wisconsinite and self-proclaimed “lover of technology”, I would have to disagree based on her five qualities that I see as critical to success in leadership:

Marissa Mayer was a trail-blazer from day one. As the 20th Google Employee, she was hired as the first female engineer in 1999 and worked the next 12 years on user experience, local, and universal search.

She was the youngest member of Google’s executive operating committee and was also considered to be in Larry Paige and Sergey Brin’s inner circle. Not bad for there not being many women in tech.

Think about the last time you were searching for a restaurant, auto mechanic, or plumber in your neighborhood. In the past, we’d resort to Yelp, MapQuest, or other third-party aggregators with ulterior motives (cough, advertising $$$).

As an innovative, entrepreneurial engineer, Marissa took the bull by the horns and shaped Google Places and universal search how she imagined the world would want to see it. The result? Local search the way we know it.

A simple search for “Milwaukee dry cleaners” yields geographically results without the bullsh*t paid inclusion garbage we’ve all come to embrace out of necessity.

Mayer graduated with honors from Stanford with a BS in Symbolic Systems and Masters in Computer Science. At its core, the study of symbolic systems research-driven, and covers the structure and manipulation of symbols that have a greater relation to physical message.

For those of us that have been in search for a while, we can appreciate the complexity of the study and equate it to the semantic web and processes used in information retrieval.

At my last agency gig, we had a program that rewarded innovation, thought-leadership, expertise, ability to show agency leadership, and salability. We were awarded magnets at the weekly meeting and those who received them posted them on their cubicles with honor.

Imagine getting a magnet for salability after being the primary mover in a deal worth over $150 million? Having heralded the purchase of Zagat, Mayer solidified (or redeemed) herself as a primary player at Google.

In a world where organizational influence matters, Marissa Mayer has been featured in numerous external publications like BusinessWeek, VentureBeat, the Wall Street Journal, Business Insider and even Vogue. Hell, she even interviewed Lady Gaga.

I believe that by now, with the dust settled and everyone moving along in the world of search, the majority of those in the industry that have followed the rise of Google and Mayer will agree that she’s more than qualified for her new role of CEO at Yahoo!.

Does anyone else have an opinion on the matter? Feel free to share in the comments.