Measuring Up: Yandex Vs. Google 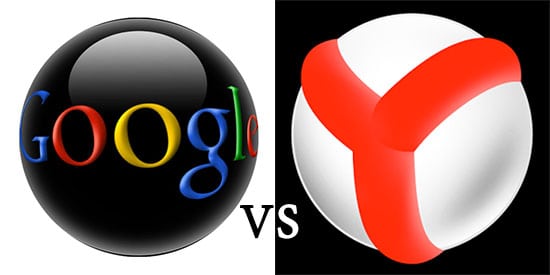 A couple of weeks ago, I stumbled across an article that talked about the European search engine, Yandex, and it led me to take a closer look at them. It’s probably been about a year since the last time I poked around in there – the change was impressive, if not entirely satisfying.

The first thing to do, of course, is to switch to the English version, which is easily accomplished by clicking on the small flag icon in the footer and selecting UK English. Doing this, I steeled myself for what I expected to be a Google Translate-like mish-mash of near-English.

I was pleasantly surprised to see I was wrong. The English versions of their pages was every bit as good as Google’s… to the point I could easily believe it was written by an native English speaker. So that was pleasant surprise #1. Note: they also offer French, German, Russian, Ukrainian, Belarusian, Tatar and Kazakh. So far, that’s all.

Playing around for a while with their search results proved to be enlightening, too. Comparing their SERPs to those of Google and Bing showed few differences, in the universals. I noticed two striking differences – one which dismayed me, while the other pleased me.

First, at present, Yandex has no UK, ES, US, CA or AU version of search. Their index, however, does return results – even some obscure ones – from the US, UK, CA and AU, as I specifically checked those. But providingÂ  localized results outside of their immediate market area appears to be a challenge they haven’t yet seen the necessity to address. That was a disappointment.

Within Russia, though, they seem to have a fairly sophisticated local search capability. Here’s a decent English description of how it works. While I wouldn’t say it’s on a par with Google, by any means, it’s a start.

The part I liked was the total absence of ads on their SERPs. [see my big happy smile here] MAJOR treat, that, after watching Google gradually push everything in the SERPs below the fold. How long that will last, of course, remains to be seen.

I also noted that there was no parallel to Google Instant. I’m almost ashamed to admit that I’ve gotten so used to Google Instant that I immediately noticed the lack of a similar search assist.

One other thing I pinged on immediately was that my results didn’t change, between logged in and logged out, even though I did a dozen related searches before I tested. That’s not a lot of history, of course, but it does leave the question open regarding to what extent, if any, they cater to personalized search.

I also see that they respond to standard search operators like site:, inurl: and intitle:. But one other minor annoyance was that the SERPs don’t state the quantity of results returned.
Their webmaster tools is an area in which I think they excel. They offer a few handy features in there that appeal to me more than what GWT offers. It’s efficient, intuitive and seems to be fairly accurate.

Yandex certainly isn’t up to Google’s speed yet, but they seem to have come a long way. I’ve been wondering how long before they decide to dip their oar into North America, but they may be further from that step than I thought.

I think before any SEO or Internet marketer is going to take them seriously, they’re going to have to expand their geo-specific abilities quite a lot. If we can’t drill down more than is possible now, it’s strictly a users’ search engine.

Next, I want to give their analytics a spin around the block, but as yet, I don’t have enough data there to do so.