I’ve been spending a fair amount of my time doing audits lately, sometimes just for general SEO purposes, but most often for penalty recovery projects. Normally, I really enjoy doing audits. Any site has room for improvement and I have yet to get through one without learning something new. What IÂ don’tÂ enjoy is head-banging.

Unfortunately, I also have yet to get through one without at least one head-banging moment. Sometimes the frustration comes from the outdated or downright idiotic past practices I encounter on a site. Other times it may be the unwillingness of the client to understand that just because others in his niche are doing [insert spammy technique of your choice here], doesn’t make it a safe practice.

This is probably the toughest argument to overcome. One conversation not too long ago went something like this:

Okay, I don’t really laugh at them. At least not usually. Well, not out loud, anyway. Instead, I try to explain to them that the fact that they got caught and the other guy hasn’t been yet may be for a number of reasons.

I also tell them that it’s NOT because the other guy spends more money on Adsense, praises Google on his blog or follows Matt Cutts on Google Plus (if only it were that easy).

When I get my discovery form back from a new client, the box for having added me to their Google Webmaster Tools and Analytics accounts is unchecked. Why? “What are those? I’m not familiar with them.”

(Excuse me while I replace my keyboard. I seem to have crushed the G, H, J and K keys with my forehead.)

Very few bloggers are in the market for SEO services… our clients are nearly always folks that are making money with their site, selling products or services. I think it’s safe to say that the vast majority of people that are likely to seek our services are probably trying to get more users to their sites, and may have been trying a few things on their own for some time. Those folks not being familiar with, or recognizing the value of, GWT and Analytics is mind-boggling to me.

Client: “I’ve been doing it this way since 1997 and it’s always worked great!”
Me: “Wonderful. And how’s that working out for you now? Maybe if you explain that in your reconsideration request, Google will decide it’s okay.”

This is usually where I mention the 500+ algo updates each year and a few of the major updates that have been driven by a need to combat the abusive technique for which our hero just got hammered. But some people just can’t get their head around the fact that things change. Behaviors that used to be acceptable no longer are.

Makes you wonder… did they ever stop crapping their pants? Presumably (if not, I really don’t want to know), they figured out by about a year old that it was no longer acceptable behavior. So what’s the problem in seeing that some things are suddenly no longer acceptable? I have clients tell me “But they can’t do that! They said… ” all the time.
Yes, they can, Virginia. It’s their rodeo. And actually, there’s usually a good reason for it. Granted, that reason may be “more revenue”, but still….

The client originally came to you in a panic, needing immediate salvation, because his revenue is down 80-90% as a result of the penalty. You shuffle his urgent matter to the top of your in-basket and rush the most urgent changes over to him.

Two weeks later, those changes still haven’t been implemented, even though he still calls daily to see what else you can do to get his traffic back for him.
(Oops! There went my second keyboard! These things are really fragile!) 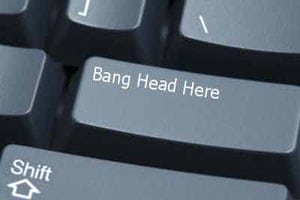 You complete your audit, make your recommendations and the client pays their bill. Then you hear back from him and he disagrees with your findings. Not because he has any conflicting evidence to point to, not because another SEO told him something different- he just says “I’m sorry, I can’t agree with that”, “I just don’t believe that’s the way they’d do it” or “That doesn’t make any sense!”

At some point, you just have to accept the fact that even though the client is willing to pay for your expertise, he’s still going to challenge you – make you justify every statement that goes against what he’s always believed. Our niche isn’t the only one that happens in, by a far cry. At least we never get bored!

Don’t go through any more keyboards, at least not with your forehead. Some things we can control and some we can’t. Just explain things to your clients the way you know to be true, understanding that when we point out that their thinking is wrong, we’re going to encounter some resistance. That’s human nature.

When all is said and done, if you have your ducks in a row, you’ll be proven right, and your credibility will jump a couple of notches. Then you’ll find that the resistance will lessen each time you shake the foundation of their beliefs.

And your keyboard will appreciate it, too.