Overstock Gets Penalized by Google

With the recent public spankings of JC Penney and Forbes from main stream media, it was no surprise when I was alerted to some grumbings in the search space about Overstock.com. This time, the Wall Street Journal is getting into the act.

It was just another Tuesday, unremarkable in many ways, when I was alerted to this thread on WMW and subsequently contacted by Amir Efrati from the WSJ. At first I braced for yet another drama, then stopped to wonder if this was all just a tempest in a tea pot.

Anatomy of the Offense

It seems while they were chatting on the WMW thread one of the members highlighted a PDF containing instructions on how to link to Overstock and which anchor texts. That then leads one to look at the various EDU links that they actually achieved with this approach.

When the story first broke, Overstock was ranking quite well for all the terms in question and has since been losing ground on them, which means a dampener or penalty was assessed. But the question remains WHY? Let’s review what we know;

First off someone dug up this PDF which highlights the URLs and desired anchors for them.

Here’s the cache of one of the pages in question. The links are like so (now removed); 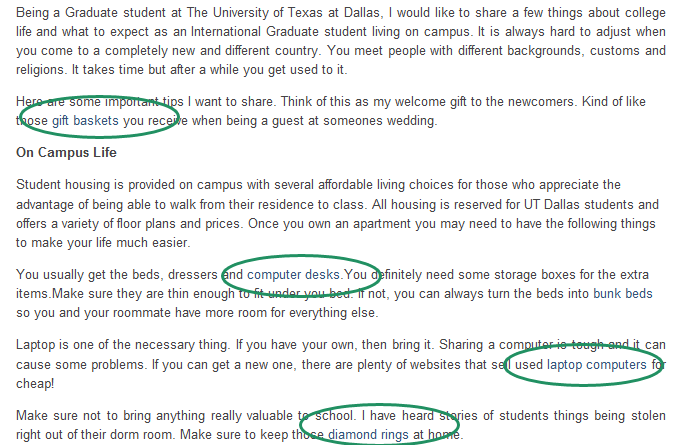 And of course there are a bunch of others such as these;

There we more than just the EDU stuff going on here as well folks. In the limited research I did there was what appeared to be mommy blogger outreach and more. Question is; does circumstantial evidence leave one at risk? Yes, most of us SEOs know EXACTLY how they got some of these links, but that’s not cut and dried now is it?

Consider this post. The links to OS all over this post seem anything but natural, but can we truly say they weren’t editorial? No. Do we SEOs know better? Well….. I leave that to you.

And on the whoops side, they used the same coupon code for the program so you can also track them down (to a degree) with this query (including the infamous PDF).

Why Is This A Penalty?

Considering there is certainly some action being taken by Google, what was the problem? From what I can tell OS wasn’t actually stipulating that links were part of the discount deal. There isn’t anything showing that they paid for them. All we really have is one somewhat suspect link profile. Not un-common either.

One obvious element comes to mind is that they’ve had ‘issues’ in the past with Google. I haven’t really dug around the rest of their link profile, not to mention their verticals (Cars, Real Estate, Auctions). It is certainly likely that they’ve got more issues than just this.

For example they used to have ‘sponsored links’ on the site. Which are no longer there… look at this SERP; 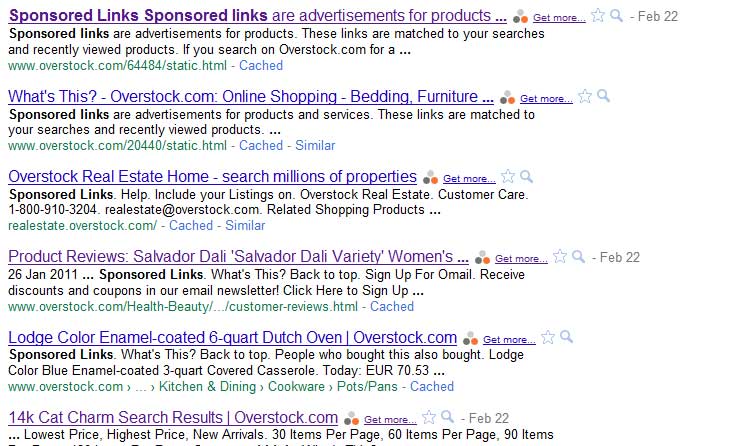 That much isn’t evident at this point. A representative from Overstock did say that,

“We enabled university webmasters to provide discount links to faculty and students. Google has made clear they believe these links should not factor into their search algorithm. We understand Google’s position and have made the appropriate changes to remain within Google’s guidelines. In fact, we discontinued this program two weeks ago. “

I do know that they have indeed talked to Google and so this might just be what it was. Personally? I think there’s more to this story, we may never know.

I shall edit this post as I learn more along the way. All in all, another interesting case.

UPDATE Feb 24; Further discussions have turned up the fact that the EDU links weren’t the only problem. Sadly I am not at liberty to discuss exactly what, but I wanted to at least update the story. Oh and for those that seemed to think I was ‘CanadianGuy’ on the WMW thread, this is NOT the case. I came to this story AFTER Overstock’s rankings were nuked. I do NOT work in any of the niches that Overstock covers. I merely reported on it all. Thanks