There’s been a lot of talk about recovering from Google’s Penguin update. But everything I am seeing focuses heavily on backlink analysis and known webspam techniques.

By now, I think most webmasters who got hit by Penguin recognize if they were hit because of their shady link building practices, but what about the sites that got hit simply because they suck at on page SEO? 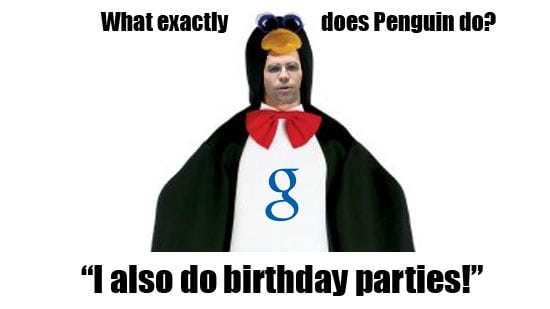 The Wrath of the Penguin

I saw a handful of sites get hit by Penguin that I believe felt the wrath not because of links, but because of poor on page practices. The sites were microsites that were super focused on a particular topic and had very light link profiles made up of only a handful of links, none of which were paid or from spammy sources.

What appears to have hurt these sites was the use of very topical, “over-optimized”, nearly synonymous content.

3 Onsite Factors To Look For

During our audit of each of the sites we found a number of similar factors. One of the most prominent features was the use of keywords. Since each of the sites were highly targeted they utilized the same keyword in the page title, description, H1, and throughout the body copy.

Obviously in this case the webmaster felt this made sense because the subject matter of the content was very specific, but as part of our Penguin cleanup we decided to change it up a bit. Focusing on using synonyms in the H1 and throughout the body copy to make the keyword usage more balanced.

Fearing again that we were triggering some sort of “over-optimization” effort we removed all internal links from the site and began focusing on placing links in places where they would appear more naturally.

Similar to our keyword usage, we did our part to use synonyms for anchor text where possible so that every link within the site wasn’t using identical anchor text.

Finally, we did a content audit on the site. Since the site was highly targeted, we feared that perhaps the site had overlapping content, and sure enough, it did.

When in Doubt, Throw it Out

As part of the Penguin recovery efforts we decided to remove the less prominent pages that featured similar content and 301 redirected them to the main page on the site.

When we finished with the site its content was still highly targeted and highly focused, but it was done in a way that looked less spammy and was ultimately more useful to users, and ultimately the search engines.

Over the course of a week we saw the majority of the site’s rankings begin to rebound. Some terms are back to their pre-Penguin positions, and others are slowly climbing back to the top.

If you have a site that was hit by Penguin, and you’re pretty sure it’s not because of crappy links, dive into your website and see if maybe your site just looks a little too optimized.

In these cases the webmaster probably would have never suspected they did something wrong, but ultimately their highly targeted efforts may have come back to bite them.