It’s amazing how the time flies huh? It was back last July when we decided to start a podcast… now we have two!

Once upon a time a bunch of us from the SEO Training Dojo used to hand on Skype and talk shop each Friday. Then someone had the bright idea to suggest we start recording them for others to listen to. While we didn’t really think we were that interesting, we bowed to the wishes of the community and started a podcast.

We had no idea what we were doing. We’re search geeks, not entertainers nor podcasters.

When it started we’d do a 1/2hr of news followed up with 1/2hr of guest time. As it became more popular we realized that we could actually do an hour of each and so The Regulators (news) and Search Geeks Speak (interviews) was born in early 2011. We haven’t looked back since. 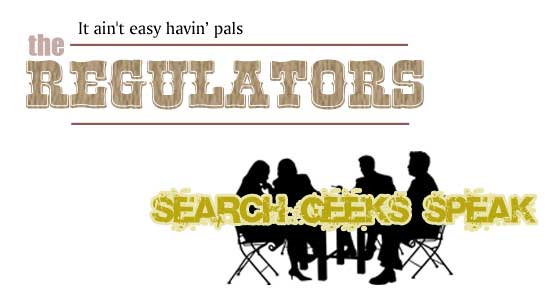 Some of the great folks that we’ve had on the show include;

We’ve also done some panel session on various topics including;

I personally didn’t believe it would last this long, never mind growing into two shows. It is often hard to get up for it each week, two hours plus planning and managing, has made for a fair commitment that is trying some weeks.

At the end of the day it has been an awesome experience. While I have known a lot of the guests in passing over the years, it is GREAT to actually sit and talk shop with them. I want to thank the guests, my co-hosts and ALL the great listeners that keep coming back week after week. A truly humbling experience.

Hopefully we’ll be back next year to talk about the second anniversary.