SERP Out; Dealing with brands in SEO

Over the last while, as many would know, there have been ongoing issues for dealing with brands in your SERPs. If you are a brand? Well, often not so much. What I am talking about is when you’re in a position such as a distributor or otherwise dealing with brands in your daily business. It is often quite a problem as far as the brand bias which can exist in modern search.

Of note, of course, are the additions of related searches for brands and those massive big ass site links recently rolled out; 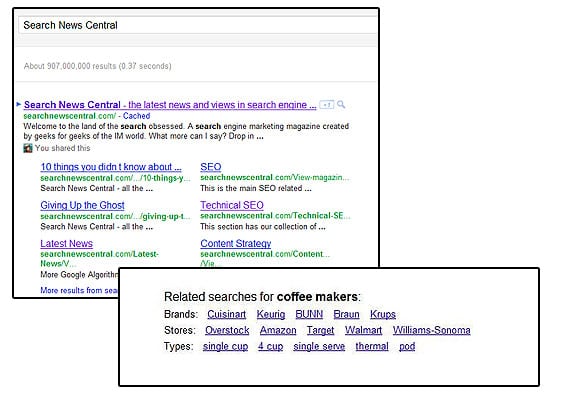 Now the good news is that by and large brand searches in a lot of cases won’t bring up the big site links; 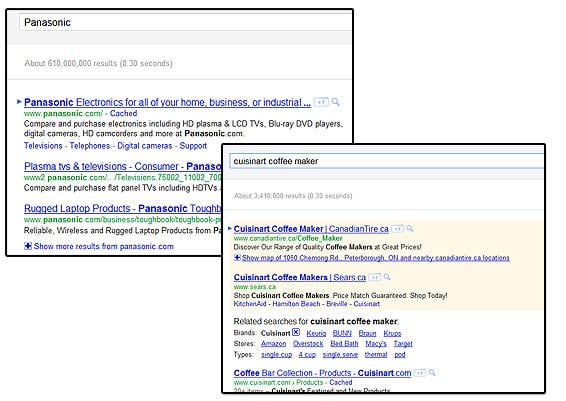 In some cases you will run into some of the more traditional in-line site links, but it’s not a huge issue. But that’s not really the huge issue and what I wanted to get into today. Some insights into how keyword research can make a world of difference, (for more on brand and query refinements read; SERP Out ““ Brand & query refinements).

The real trouble here is when you’re going head to head with two and three paks that might emerge from various spaces you may be into. Let’s take an example ““ looking at a search for [ford focus]; 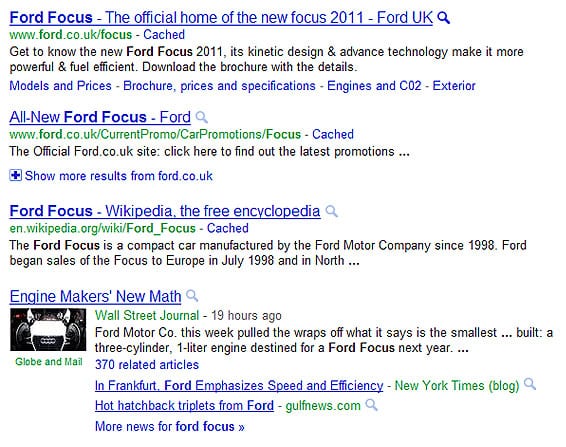 Here, below the paid ads, we have a two pak from Ford, a Wikipedia entry and then news (on others there were news and image universal elements). This of course means that the only real spots available are well below the fold. Not ideal.

Here’s an example of one that has a brand 3 pak, News universal, Image universal and then Wiki; 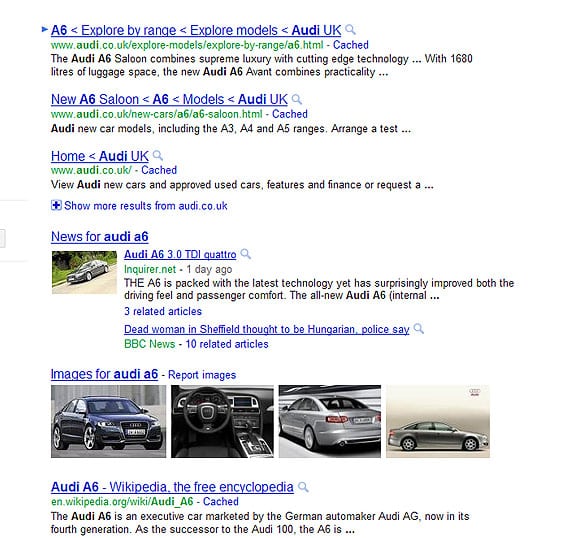 Obviously in cases like these, it really doesn’t make any sense to be targeting these types of terms. But when you deal with brands; what can one do?

Modifying for the sweet spot

The next thing we have to do is to start to work some modifiers. In this case we can look at a few that pop up with some basic keyword research including the modifiers, [used] and [for sale]. We’ll use the above Audi example…. 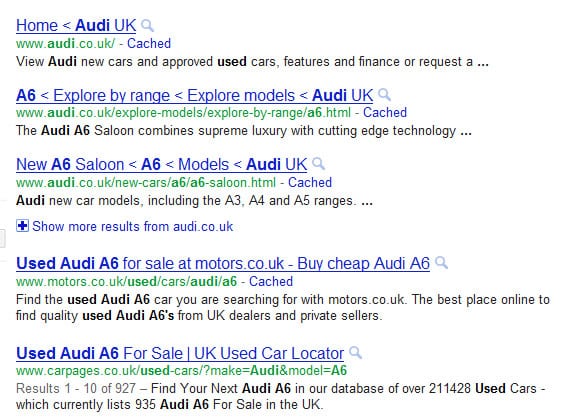 Ok, not bad, but we still have to deal with the brands at the top which is going to be problematic once again. The best we can do in this case is moving in below the brand 3 pak. It’s a start, but we are still going to have some issues here.

So let’s try the [for sale] modifier; 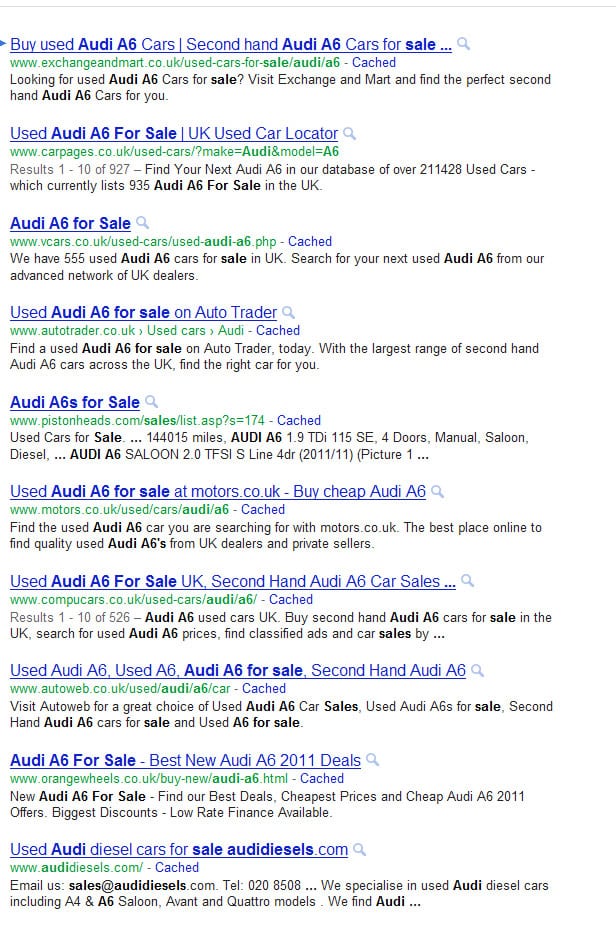 Well whaddya know? In this space there is no brand to be seen in the top 10. This is certainly the area that we want to look at as far as potential for getting traffic from the top spots, sans le brand! Of course the situations can vary given some of the other above examples, but the point here is more about looking at the SERPs and seeking out the opportunities that may be available.

Just for some confirmation, grab whatever valuation tools that you use and see how they stack up. In our case let’s grab PPC data and Insights; 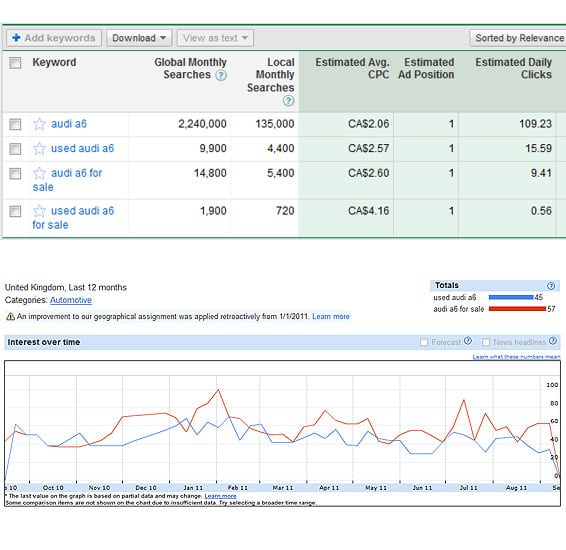 Sure enough, it does seem like the [for sale] modified term even might bring in some more traffic for a top ranking than the [used] modifier, where we are actually competing with the brand. This is exactly the kind of situation we’re looking for.

Once again, each situation can be different, I’ve come across plenty, but digging in and looking at the SERPs will often help lead you into directions that haven’t previously been considered. I generally, for this and other reasons, advise peeps to be watching the SERPs and adapting keyword research on an ongoing basis.

Another element which also plays into this is of course query classification. These are the types of queries (and speudo queries) we generally know as;

For more on that, be sure and read; Query classification; understanding user intent

What we can learn here is that not all queries are pre-qualified to achieve the goal we have in mind. Often times the more general the query the less likely it is to serve our websites needs be they informational or transactional.

In our example of using cars, we might be selling new and used cars, or we might be a car blog/site that is publishing information on them. Which modifiers we use will also help us narrow the field as far as getting search referrers from people looking to actually use what we’re promoting. In our example we’re thinking transactional and so [used] and [for sale] are the ones that make the most sense. Actually, given that the [for sale] seems to be the closer classification and better option, this is just freakin awesome. The stars have aligned!

Of course the most obvious element that we can also do here, when dealing with brands in your space, is to go local. This offers us an even better chance at leveling the playing field. If your business is serving certain regions or areas, you can also adapt your SEO program (if you aren’t already) to ensure you’re also hitting those spaces.

Many times the larger brands, for those in the distribution arena, aren’t going to be nearly as prominent in that aspect.

Another area that you should also be paying attention to are the brand query refinements. You know, these gems;

These are essentially query refinements suggested by Google. Now, that doesn’t really mean getting into them, because those are created via query data that Google has (based on query data, user data and query refinement data. More here).

What you can do though, is look at these brand query refinements to once again establish if there are areas which we can actually get into easier than the core brand searches.

Ok, before some of you start going mental in the comments about Google’s treatment of brands, I might as well address it.

For a long time a lot of folks have been screaming that brands get an unfair advantage in the SERPs. One of the more memorable ones was from the ever-awesome Aaron Wall

Many of the complaints even look at how they are treated as far as penalties go, (generally they don’t get hit as bad) while others lament why they get such rankings when traditional SEO strategy may say they don’t deserve it. Allow me to paraphrase a conversation I had (on a few occasions) with a Googler engineer;

‘When users search for certain entities, they expect the results to be right there at the top. This is not really a brand treatment of preference as it is an aspect of search quality’

It may not be the tin-foily answer that many want, nor believe, but it does really make some sense form an IR perspective. That being the case I don’t really get worked up about why they’re in a SERP we’re after. I just know that they are and will adapt the SEO program accordingly (for more see; The Art of War ““ SEO Style ).

Ultimately we fight with what we have and to me ensuring that the right targeting strategy is in place, that produces maximum bang for the least resources, is the way to go. I could likely spend days showing other examples, but the main goal here was to get ya’ll thinking laterally when attacking brand spaces. Ai’ght? We cool?

Note; for members of the SEO Training Dojo, we’ll be talking about this more in the Friday Chat session this week. Not a member? Duh… git on it!