Site audits can be fun”¦ if you like digging into code, data mining and research, that is. Depending on several factors, such as how often you perform them, the size of the site and so on, they can range from “extremely easy“ to “intensely time consuming“. You can cut down on some of the time by creating a checklist of steps, but each site has its own set of positives and negatives, problems and solutions. You can’t really “cookie cutter“ the stuff; you might miss something if you do.

Site audits have been on my mind a lot lately ““ probably because we just finished a few of the “large, time consuming“ variety. We also did some preliminary research on a few sites, which we do before a contract has even started (we like to know what we’re taking on before offering the contract). These experiences gave me a lot of food for thought, because of the wide differences between them in terms of results.

A recent spate of preliminary site research pointed out to me ““ once again ““ that not every site is the same. While every site could use an audit, on some sites a full audit would be wasted. As well, for some sites, you should spend more time on one part of an audit than other parts of an audit.

Site A was a French version of an English site – placed in a sub-directory (i.e. example.com/fr). It’s possible to do a site audit in such a condition, especially considering that the French version was its own WordPress installation, but the sub-directory contained less than ten pages. How much can go wrong, in a technical sense, for ten pages?

Site B was a well-known brand, with over 1,700 pages. However, most of those pages were hidden behind password-protected barriers and set to “no-index“. Https can be searched, indexed and ranked (the bane of many an optimizer when not correctly set up). Therefore, do you spend more time on the technical aspect than the content? Where should you focus your efforts most?

Because of the variations, your site audit checklist should be flexible.

If you’re just beginning and have only performed a few site audits, it’s good practice to add to the list whenever something new comes your way. For example, if you’ve never run across a site with SSL and are just learning the difficulties that might crop up, incorporate SSL into your audit checklist. You might add something like:

Does the site use SSL? If yes, check for duplicate content issues.

Another example is WordPress sites. WordPress sites come with their own set of issues. Some of these issues come from lack of user knowledge, while others are native to WordPress.

For example, if the user doesn’t know how WordPress deals with titles and permalinks, you might end up with numbers for a URL instead of pretty links (for those that don’t know, if you put the content in before you put the title in, WordPress gives a number as the permalink). As well, when WordPress converts title characters such as the apostrophe, you get an ugly %E2%80%99 addition in the URL. To incorporate potential WordPress issues into your audit, you might add:

Does the site use WordPress? If yes, check for:

And so on. The key is to add a notation each time you come to a new situation. That way, you can perform (or skip) any particular part needed for that specific website without leaving anything undone.

Auditing Foreign Websites ““ How Much Can YOU Do?

Some of the most interesting audits are those written in a foreign language. Now, it might seem that you would do them the same way. After all, code is an international language, right? Yes… and no.

Some parts of an audit you can do on your own. Even most foreign language sites have code written in English ““ and a 404 is a 404, no matter what country you’re in. Yet, this, ladies and gentlemen, is one of the reasons we do a preliminary scan before accepting an audit contract. You have to know what it’s going to take before you quote them a price (of course, if you charge the same for a four-page audit as you do for a 1,400 page audit, I guess it doesn’t matter).

One of the cross-language issues we came across was while looking for a blog on the Dutch site. My team and I don’t understand Dutch”¦ can’t read it, can’t write it, and can’t speak it without mangling the pronunciation. “Blog“ is similar in most languages, though, and that’s what we were looking for. What we found, however, was “Advies“. The site creators had chosen to hide their blog under the title of “Advice“.

You Can’t Just Hire a Translator ““ and Google Translate Sucks

If you’ve ever read an article translated from one language to another, you know it. Literal translations very seldom read correctly ““ especially if it’s from English to other language or vice versa. As a general rule, we just don’t put our words together in the same format. As well, some languages may have variations of a word”¦ for example; did you know the Dutch have at least five ways to say “hearing aids”?

When working with foreign sites ““ even if you speak the language -, it’s best to hire a native counterpart. Those native to the country can offer advice on more than just the language; their insight into the country’s online habits, where they search, what social media sites (if any) they use and so on is invaluable.

As well ““ and I know this is mind-blowing ““ Google Translate is a shot in the dark. It might be able to help you read what’s there, but it’s highly inaccurate in gaining real understanding of the content on a page. Therefore, it’s even more important to hire a native speaker who also understands SEO and content development.

We’ve found that the best use of a native counterpart is as a consultant. You do the research, and they correct you where you’re wrong. For example, if your audit finishes with an SEO campaign, the consultant can point out where you might have gone wrong with your keyword translations. They can also provide you with tactics you wouldn’t have considered, based on the audience. 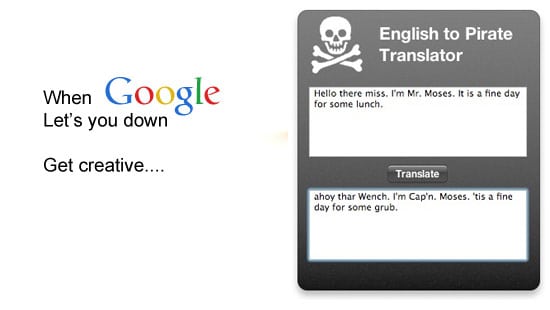 When dealing with clients and SEO counterparts, you have to be able to trust the SEO you’re contacting. Unless you have a strict “no foreign language” policy, making contacts from other countries is an essential part ““ or should be ““ of your networking. Find out what they’re like, and make sure they have a similar background in optimization.

For your audit checklist, make sure you include these contacts for each language, and how to reach them. In all honesty, this should be the very first step of your audit:

If the site language is not in my native language, who is my counterpart?