With the coming Googlelopalypse, as chronicled by NineByBlue, content’s going to become even more important.

How many more times can we all say ‘content is important?’

I dunno. How many more times can you ignore us when we say ‘content is important?’ I can say it 1 more time than that. 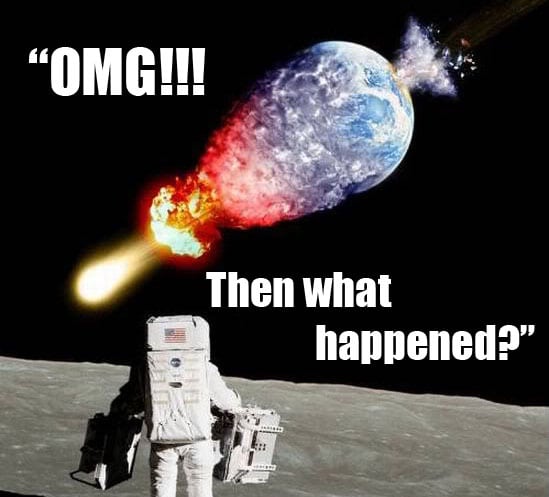 One by one, Google’s taking away all our fun little tricks, from keyword optimization to link acquisition. Unless you’re a serious pro, you’re risking a major butt-kicking in the SERPs if you focus on class SEO tactics.

Instead, you need to attract attention the old-fashioned way. With great storytelling. Great stories get fans, and links. You can tell a fantastic story about anything. Anything.

And, storytelling is universal. It’s the ultimate content. We’re raised listening to stories, and our response to a good story is always positive.

Say you’re trying to rank for ‘car insurance’. You’ve got a few options:

Car insurance? I’m going with someone my audience can identify with: Carl. Carl’s a good guy. But he’s kinda cheap. He doesn’t want to spend any $ on car insurance. So he’s going to take his chances.

10% of Americans admit they’ve driven without car insurance. So a lot more have actually done it. This is a good market that I haven’t tapped yet. Carl is my ticket in.

He wants to buy himself a new car. So he’s saving up his pennies. One way he’s doing that? By not buying car insurance. After 12 months of scrimping and saving, he’s got $1500 in the bank. Enough for a down payment on his next car. Sweet!

He jumps in his jalopy and heads to the local car dealership. He’s got his car all picked out: An Econobox Ultimate. Sure, it’s a plastic box. But it’s going to be HIS plastic box, and he’s dang excited. For the first time in his life, he’s going to get to breathe in that new car smell in his own car.

Oh dear. What Carl forgot is that he has a busted taillight on his jalopy. Couldn’t afford to fix it, you see, since he was saving every penny, and because he was working 2 jobs to save up enough for the down payment on his Econobox Ultimate. Did I mention he wants a blue one? With power sunroof? And the 19″ rims?

He’s driving down Route 18 (if you’re from New Jersey you know whereof I speak), happy as a clam, when Jane, the policewoman, sees his busted taillight. She lights him up and pulls him over, figuring she’ll give him a fixit ticket and that’ll be the end of the story.

Alas. Carl has no car insurance. Instead of a ‘free’ fixit ticket, he gets socked with a $500 citation for driving uninsured.

Carl is sad. So sad. Now, he can’t afford his Econobox Ultimate. He can’t even afford the Econobox LE (Lame Edition).

Stories are easy(er) to sell

Why does all this work? How will telling the story of Carl’s pathetic-ness help you sell more car insurance? Here’s how:

Make sure your story is easy for folks to spread with all the usual tactics: Share buttons, placement in relevant communities and a call to action.

You don’t have to guess at story ideas.

If you want to make sure you find an easy-to-sell story, check out Reddit. Search for ‘stories’. Look for the story types that are getting the most votes and will work for your particular product/service/pitch.
Right now I see “Bitter breakup stories,” “Valet parking disasters” (great car insurance fodder there), and my favorite, “Stupidity-induced injuries.” Yes, Decalls, I broke my hand in 3 places beating up a house once. The house won.

Stories are the currency of any community. Do a good job of storytelling and you become part of that community.
This isn’t just marketing speak for ‘pay writers more money.’ The toughest thing to do is get a disengaged audience to join a community of folks who like you and your product. And that community drives SEO success through links, citations, and even user generated content if you give them a chance.
Use stories to build community and you’ll end up with truly future-proof SEO. Plus, it’s a nice break from writing top 10 lists.