Teaching People HOW to Think, versus WHAT to Think ““ What a Concept!

Disclaimer: The following post contains opinions that are of the authors and may not necessarily reflect the view of Search News Central. Discretion is advised.(lol)

Last year, I published an ebook, the first of a series (shameless plug to Critical Thinking for the Discerning SEO deliberately omitted ““ see what I did there?), in which the main premise was that rather than teaching people what to think, we should be teaching them how to think.

Developments in the SEO and IM world make me think we’re going in the other direction. Not just recently, either. It seems to be getting worse, rather than better. 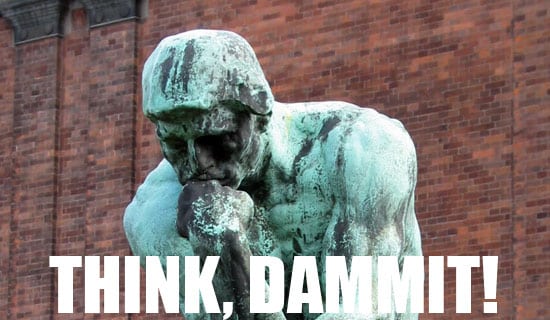 There are a handful of individuals that have established such a name for themselves as to be deemed “experts” ““ perhaps synonymous with SEO itself, in the minds of some. While I certainly respect a great number of voices in this game, I think this is inherently dangerous.

Many of those household names are very careful to couch their opinions in “may indicate” or “seem to” terms, so that it’s clear that they’re stating opinions and conjecture, not fact. Bravo!

Many also go to great lengths to state both sides of every argument, and let their readers decide for themselves. Even better ““ it fosters comprehension!

And some provide more than just their own pulpit”¦ they form communities, which encourage some great discussions and promote interaction, often between novices and the older, more experienced hands. I’ve belonged to a couple such communities and found them productive.

In fact, I’ve been extremely active in the SEO Training Dojo for a couple of years. I learned more there in my first month than I did in the two years prior, and I continue to learn something worthwhile every single day. So I’m a strong advocate of communities, particularly those that are extremely learning-oriented.

There’s a hidden danger in communities, though, where every member is encouraged to speak their mind. If, for instance, I pop off about some SEO or IM theory on the Dojo forum, some other member may read it and see it only as “something read on the Dojo forum”. That can bear the connotation of endorsement by the Dojo. What if my idea is totally whacked?

I’ve seen the same thing happen on many technical forums where I worked as admin or moderator”¦ many users tend to view everything they see there as bearing the credibility of the forum itself, which may be stellar, but the statement they read is totally off-base.

Novices, particularly, may forget that anyone and everyone can post any nonsense they like, and it may not yet have been noticed by a moderator and errors pointed out.

People being what they are, some will unfortunately believe everything they read, without thinking. That’s easier than actually thinking, after all, isn’t it? Is that their fault? To some degree, certainly. But it’s also the fault of those that allowed (or encouraged) them to let others do their thinking for them.

That’s why I think that any community must take extraordinary measures to immediately clarify or correct any comments or posts which are misleading or could be misinterpreted.

And here is where I’m going to point out an issue I see time after time on one of the large, popular SEO communities around – SEOmoz. Members can post on any relevant topic to the Youmoz blog, and those deemed worthy are occasionally moved to the main blog. I have no idea exactly what the criteria are for such selection ““ each such post, though, is preceded by this disclaimer:

This post was originally in YouMoz, and was promoted to the main blog because it provides great value and interest to our community. The author’s views are entirely his or her own and may not reflect the views of SEOmoz, Inc.Â

To be honest, if Rand is going to offer such promotions to the main blog, I don’t see how he can do much more than that. Of course, there’ll be some that won’t bother to read the disclaimer.

He could put another disclaimer at the end of the post, I suppose. But then, some wouldn’t read it there, either.

Maybe he could put it in the middle of the post. Two or three times, even.

It wouldn’t do any good. That disclaimer is a signal to the reader that their acceptance/rejection of the post’s content is contingent upon them exercising some independent thought”¦ but there will always be some that resist”¦ those that prefer to think that by simply reading something, they’ve satisfied their responsibility.

And some of them will go out and implement the technique they read about on their own sites. The fallout may determine how valid the technique was. And if it causes them problems, they won’t blame the author of the post.

In all probability, they won’t even remember who the author was. If they make the connection between the fallout and the technique, they’ll blame SEOmoz.

Rand’s no dummy. He knows that risk exists, I have no doubt. I suspect he made a value decision, and considered the potential benefits to outweigh the potential risk. And to be realistic, one disillusioned soul isn’t going to have any appreciable impact on the Moz’ bottom line.

At worst, that member might opt out of renewing next year. And I’ve seen some posts moved up to the main blog that DID offer some value, beyond that of simple engagement with the community, so maybe that value decision is valid.

ButÂ  what if that novice doesn’t put the questionable technique into practice on his own site? What if he implements it on a client’s site? Or on five clients’ sites? The potential damage is certainly increased.

Granted, a novice isn’t likely to be servicing too many Fortune 500 clients, but Mom & Pop shops can suffer serious damage, too. Their losses may be cited with fewer zeros in them, but still be devastating to their business and to their lives.

So, what’s the answer? Assuming that Youmoz posts will continue to be elevated to the main blog, then I think some serious editorial perusal is in order. A standard disclaimer may fine on my blog – I rarely see 1,000 visits in a day, and I’m not one of the first places a novice looks for guidance.

But I don’t think a disclaimer is sufficient on a site with the visibility and perceived authority that the Moz enjoys”¦ things are taken too literally there. Fair or not, every word read on that site will be attributed to Rand, by at least some. Notoriety does that.

Lest anyone think this is a bash on Rand or the SEOmoz, it definitely isn’t. I happen to like Rand and respect much of what he does, and I think that SEOmoz offers some real value to its members. But they have thousands of readers who aren’t members; new readers show up every day.

And we all know that there are a lot of lazy people out there, unwilling to do their own thinking.Â  Until/unless we can retrain them, I think we have the responsibility to not lend credibility to undeserving content.

Otherwise, we risk a cruel twist to Euripides’ quote”¦ the gods may visit the sins of the children upon the fathers. In fact, when you think about it, we may already be at that point.

For those that aren’t already doing it this way”¦. each of us is more experienced than someone out there, in some regard.

Let’s start helping people learn how to think, rather than what to think. State your opinions, but explain why it’s your opinion. That’s the surest way to get people thinking for themselves.