The Battle for the Living Room; Xbox One

Ok, I was tempted to actually write that “Xbox Won“, but I guess that’ll do.

As I sat watching the announcements from Microsoft today with my kids, mega Xbox geeks, I had to wonder about how this might affect the battle that I usually follow in the world of search. More specifically, Google V Microsoft (aka Bing).

For quite some time now my cohorts and I over on the Regulators podcast have talked about the; Battle for the living room. Concept being that inevitably we move away from desktop and laptop computing to mobile, tablet and ultimately, televisions to consume media.

Indeed Google does well on the former, but they really haven’t cracked that last one, which might end up being the most important one. Google TV? Didn’t really go so well. Google has made voice search a big part of their future? The Xbox One rocks that… 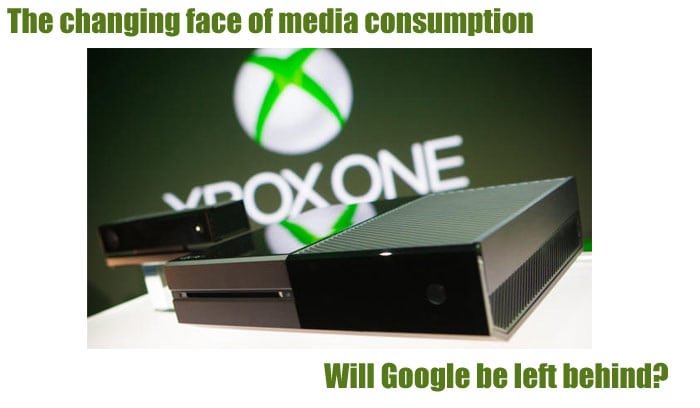 Not only can we see some of what the future of media consumption might look like via the new Xbox One, but there could be implications for search as well. If Microsoft has such a huge advantage over Google in this area, we have to consider the fact that their browser, Internet Explorer, and their search engine, Bing, come as the default standard for web access on this device.

Indeed my kids know to ‘Google‘ things, at least when on the computer, but they are far more comfortable in the Xbox environment, than they are on the household computers. In fact, they probably watch more from Google’s video flagship, YouTube, via their Xbox… than they do from the web via browser.

I often wondered if there’s a generation growing up in this manner. A generation that get’s to know Bing because of the Xbox. Given where things seem to be headed, there is every reason to believe the landscape may change in the coming years. The Google stranglehold isn’t as secure as it once seemed.

Here, watch this video I made, to get a sense of some of the awesome they’re doing and what it might mean to us search marketers;

Up to this point one of the few areas I have been giving Google Plus some luv, was in the area of interactivity. In specific, Google Hangouts. They’re great as a visual engagement element and hey, my kid actually will use it to do live gaming and posting off the end result to YouTube (about the only way I can get him to actually use G+ lol).

Xbox One? No Probs… thanks to Microsoft’s Skype purchase, that’s coming to the new platform. Given they’re relationship with Facebook, I can just imagine that something along those lines will also pop up in the coming months. That one advantage may soon be lost.

And my son’s gaming videos? Yea, well… he will be able to record those straight from his Xbox One from then on as well…

I realize this is all premature, but there’s enough here to start considering as marketers and media consumers as well… The future looks damned interesting and the fight isn’t over just yet… I for one won’t be declaring Google the winner.

You can watch the entire announcement presentation here.

For the gamer geeks

Anyway, it’s all quite premature… I just thought it was some interesting geekery worth sharing. For the gamer types, which many of us are, here’s some clips of stuff coming from EA sports and Call of Duty. Looking goooooooood

Call of Duty Ghosts on Xbox One;

EA Sports trailer for Xbox One

And while I am at it, I recalled a Microsoft patent I wrote about back in 2008 that dealt with biometric data. It talked about measuring things like;

At the time I kinda thought it was creepy, but it does make a heck of a lot more sense given what they can do with the Kinect. Is it still creepy? Sure… but damned cool at the same time. The video below get’s into that element some… worth a watch (specifically, around 3:42 in);