Here’s why browseo.net is the one.

Today I’d like to introduce you to browseo.net, a tool you can use to browse web pages from a search engine’s perspective.

It strips out all styles and scripts so you can analyze a page’s text and images without distractions. At the same time, meaningful facts are displayed alongside the content and you can highlight different link types on the page.

When we developed browseo.net, it was initially meant to be a tool we use internally. But as the legend goes, out of compassion with struggling webmasters, we decided to open it up to one and all, for free. 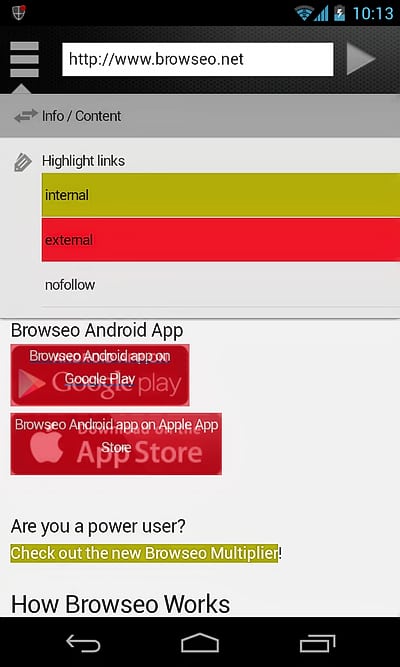 Browseo.net has been publicly released in 2012, and after developing an app for Android devices in the same year, a brand new iPhone app has just been released.

To be honest, I was hesitant at first. There were SEO tools out there that had been created by more experienced pros (I started SEO only in 2004) and that people have already been using for many years.

Did the world REALLY need another SEO browser?

Luckily, my co-workers convinced me to screw my fears and just do it. As a result, browseo.net is now used by thousands of webmasters all around the globe. Here is why I think the world needs browseo.net:

I think we chose some pretty useful info to be shown alongside a page’s pure content. Dan Thies asked for a SERP preview and downloadable spreadsheets which we’ve built in. Several members of the Dojo helped test our experimental cloaking detector, which apparently works well in many cases but still needs work.

The fine Dojo people have delivered invaluable feedback so far, and I hope we can keep the conversation going. Now with free mobile apps released on two major platforms, everyone can use browseo.net on the road and while waiting in line as well.