I was sitting here contemplating how far I would make it before collapsing into a pile of dust after a long few days… weeks… months (lost track really). Then a little something popped up on the radar, in this case from one of my many Google Alerts.

It seems that the fine folks over at the Washington Post were playing with some things, that seemingly got indexed when it probably shouldn’t have. You can find it here, but in case it get’s nuked by the time you’re reading this, here’s a screen shot;

Of course it’s not entirely newsworthy I suppose, but it is a great reminder that Google will index and return just about anything, so one needs to be a little more careful. And hey, if Google seemingly dislikes them SEO tactics, maybe ya don’t want to advertise the fact it’s something you test. Just sayin’.

Especially when yer getting syndicated/scraped a lot… have a look-see at this SERP. So popular it even got a News Universal (rofl). 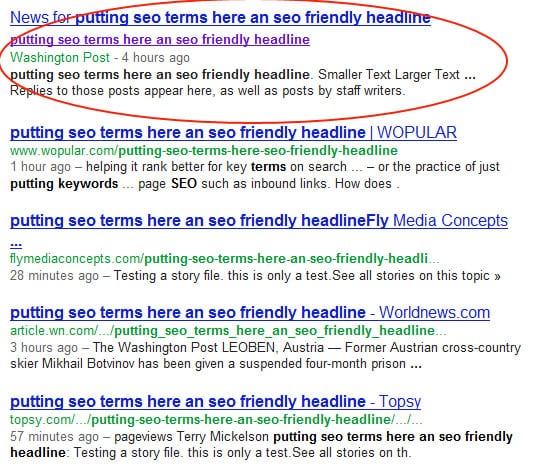 It also might help those spewing the gloom and doom of the death of SEO, the ‘where are we headed‘ kind of attitudes that have prevailed in the wake of the Penguin, Panda and other notable Google updates.

SEO is alive and well. It’s just about far more than mere links. If the larger sites/domains are still placing a value on it right down to the types of headings their using, the proclamations of it’s demise may just be premature.

Anyway, it seemed a cute tidbit to pass along… I hope you had a bit of a giggle. Now to get some shut-eye. Laterz!