SEOs are a unique bunch, in case you haven’t noticed. We have real OCD tendencies (and, for some us, it’s full-blown OCD), we just know better than you (about everything), we are intensely, over-the-top goal driven beings, we are scientists-in-a-vacuum, we are data-miners and data-hogs, we are behavioral futurists, and we make the web a better place for you and yours (for a price). 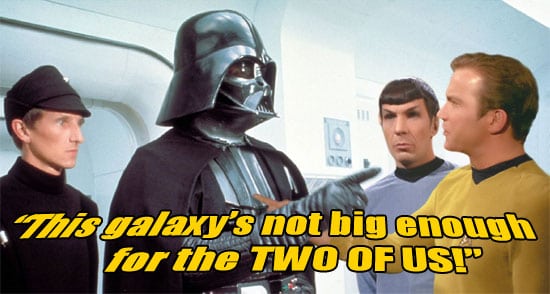 As a caveat, the good ones are like that. It’s hard definitely being an SEO, as so eloquently pointed out by Portent’s own George Freitag in “Why Web Professionals Hate SEOs”. George, as a fellow SEO, you know that we are equal-opportunity haters on every other web professional too. They may hate us, but we hate them equally as much. And, really, turnabout is fair play.

After all, if designers and developers had their way, the web would be nothing but a bunch of huge, sexy images with millions of nested DIVs blended with functionality so overwhelming and powerful that it would virtually alienate anyone over the age of 35. No one would ever use the web, but the artists would have their canvas, right?

As a writer myself (by education and training), I’m all for “Ars Gratia Artis”, but that’s successful with consumers about 0% of the time. And, I won’t make excuses for Crap Hat SEOs; they’ve read three blog posts and follow “only the best search professionals on Twitter”.

Unfortunately, it’s simply comes with the territory of a profession that expanded exponentially over the last half-decade. Professional SEOs will always be lumped in with them and have to fight their battles and over-reaches.

The Brave New World Isn’t So Brave. Or New.

Google’s Panda and Penguin didn’t change the game. It just made the rules a lot more evident to those who thought there were no rules. Those SEOs who knew the score long before Google had to put down a heavy hand, have come through unscathed nearly 2 years later.

Designers and developers just kept on polluting the web with “beautiful, functional” brand sites. But, when the Piper comes calling, and accounts are at stake, it’s really strange how those same developers and designers suddenly are “eager” to work with SEOs.

SEO is the Thing

Unless you’re Coca-Cola or another one of the Fortune 50, unbranded search is how people are going to find you. Sorry, but them’s the facts.

So, while designers and developers have thousands of things to contemplate (how to make the brand logo “pop” or make a cart add products), SEOs are contemplating the strategy and schema, from content to information architecture to technical foundation to link graphs and the multitude of things each encapsulates.

Each and every one of those things matter in the quest for findability. Is there any sense in making a brand logo visible if no one is going to be there to see it? Or, a cart that will make you a ham sandwich after you finish the purchase, if no one is there to use it? Instead of treating SEOs as a nuisance and as someone who’s only trying to impede your progress, you might actually find that we can make your job easier in the end.

Jack of All, Master of None

The countless duplicate pages you’re making every single time a user uses your product filters, or how you wrapped all those reviews in an I-Frame instead of attempting to take the extra hour or two to use the API, or that mistake you made by mistyping the page name and just created a new one. Yeah, I found that too.

Those things have a big effect on a site’s authority and trust. Also, don’t let the fact that I can’t create a CSS sprite on my own fool you into thinking I don’t know how to create a cascading style sheet and know how they work.

SEOs (the good ones) know enough to intervene when it looks like a disaster-in-the-making and will end up as a dumpster-fire for search in two months. You may not care, but just remember, we’re ones that are accountable for “success” at the end of the day. You know, the “hard metrics” that clients need before renewing an engagement.

Here again, the professional SEOs know exactly what we are asking for when we ask for it. Most will actually hate asking you do it because we know how much time is involved and the rework we’re causing. But, in the end, we’re helping you to build a better site for the consumer and site that gets found in the SERPs.

We Don’t Know The Entire Algorithm, But We Know Enough

My guess is that not even Matt Cutts is clued into the ENTIRE Google algorithm, and that guy is the Head of Search Spam at Google and (un)official Google-SEO spokesman.

Being a jackass and claiming that I don’t know the entire algorithm simply tells me you’re a defensive person (and possibly a lazy one too). We know enough factors of the algorithm, and whether they have a positive or negative effect, on a website that the changes we ask for have a purpose.

If not knowing the entire algorithm is cause for loss of credibility for an SEO in the eyes of a designer, then that can be transposed to a designer not have full knowledge of Nielsen’s Heuristics Evaluation. Moreover, I’ve never heard anyone say, “Cause’ the algorithm, dude!” Just doesn’t happen. And, if it does happen, point in the direction of said person(s), we’ll have a chat.

SEOs will fully explain these things to you if you have the time. Seriously. Ask a question about why or how this is going to affect the website or search engine indexation. Any SEO (the good ones) will be more than happy to walk you through why it matters and why it should be the way we need it.

How Designers, Developers, and Copywriters Can Ease the Pain

Short of locking you in a room and playing professor for a few days straight, the best way, as George points out, is to communicate. That word makes it sound easy and effortless, but it’s anything but. When you’re under deadlines and shuffling between projects, ain’t nobody got time for that (my homage to Sweet Brown).

The real key is to sit down next to that SEO (that’s right, put down the email and step away) and let them walk you through it. Sure, it’s 10-20 minutes out of your day, but when you can see it from their point of view as they walk through your code or design, it breaks down barriers that email can’t. It’s that human element. It may not solve the issue, but it will help both parties gain a healthy respect for one another.

And, that’s first step to compromise. SEOs, as much as we know we need it our way because it’s right, we have to be willing to step down off the soapbox. You have to be willing to capitulate some things in order to get the bigger win for search. You may not be able to get that direct 301 you need on duplicate content, but with communication, explanation, compromise, you can convince that developer to work in a rel=canonical.